On Friday, PlayEveryWare announced that a new update for Elliot Quest was in the works. The main new feature of this update is a Miiverse Journal, available in the inventory screen and easily accessible via the touchscreen. You can use it to post about secrets you’ve found or areas to need to come back to, but also tell which puzzles you’re having trouble with, etc..

Thanks to the Journal, you can also see all the posts from the community for the room you’re currently in, and you can even give a Yeah without leaving the game. There’s even an option allowing you to see all your previous posts, so you can see where you need to go in case you get lost. 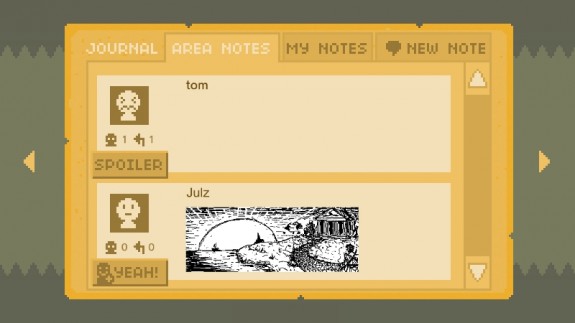 Thomas from PlayEveryWare explains that this feature was inspired by the community itself, and how players just keep on helping each other (while avoiding spoilers). He’s convinced that players will absolutely love this new feature.

But that’s not all: this new udate will also include various “secrets”, that will be revealed in the upcoming days. One of them is an option to change the control scheme (requested by many players), which comes with an “endless list of performance fixes” (to ensure the game runs as smoothly as possible in every level).

This new update for Elliot Quest will be released in the upcoming weeks.