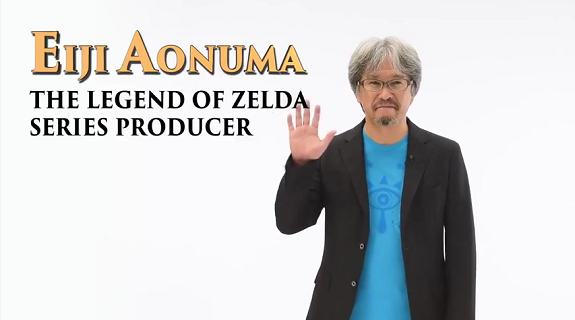 Following the Nintendo Switch hands-on event, earlier this month, various French outlets have published their interview with Eiji Aonuma, about The Legend of Zelda: Breath of the Wild and other topics. That’s the case of Le Monde, Gamekult, Jeux-Vidéos.com, and even Nintendo France themselves.

But in this post, we’re going to cover two excerpts from Gameblog’s interview that isn’t directly related to The Legend of Zelda: Breath of the Wild.

If you’ve paid any attention to the game industry in the past few months/years, you cannot have missed Virtual Reality. Described as the “next big thing” by many, VR has the attention of many developers and players all around the world.

Even Nintendo has shown some interest for the medium, though it’s more of a cautious interest than anything. Patent documents for the Nintendo Switch even mentioned a VR headset that would use the main unit as screen.

But what does Eiji Aonuma think about VR? Will we see a Legend of Zelda game in VR any time soon? The answer is… no, not really. Here’s what he had to say about that:

You know, one of the main points of interest in Zelda games is to have Link progress, to watch him grow up. In VR, you wouldn’t be able to see Link, you would see the world from your own point of view. I don’t think it would be very “Zelda-like”.

In other words: don’t expect a Zelda game in VR any time soon… not that Nintendo is planning to launch a VR device/accessory any time soon anyway.

When asked what sets Nintendo games apart from the competition, Eiji Aonuma has a pretty interesting answer. He begins by explaining that he’s never made games with another company, so it’s a bit hard for him to answer. That being said, he has played quite a lot of games made by other companies, so he is still able to provide us with an answer.

For him, what sets Nintendo games apart from the competition is that they generally start right away: you don’t have to go through long-winded intro cutscenes, or endless explanations. In other words: you can start playing right away, and you don’t want to simply turn off your console instead.

For those of you who just rolled their eyes while reading that last bit… To his defense, he does specify that this doesn’t apply to all (100%) of games made by Nintendo, and that he’s talking about Nintendo games in general.

How the industry has changed

For Eiji Aonuma, the most striking change regarding the game industry is that the average quality of games has improved. He specifically points out western games, which used to be below Japanese levels from a technical standpoint, just a few years ago. But nowadays, many western games are of pretty high-quality tech-wise, often above games made in Japan.

Eiji Aonuma is well aware that, because of this, one cannot really afford to make a game that’s not of better quality than the average. Naturally, to do as well or better requires a lot of time and money. He’s not trying to lecture anyone: he’s quite aware of how long it’s taken them to make The Legend of Zelda: Breath of the Wild.

For him, it’s pretty clear that when you spend a lot of money and take a lot of time to make a game, you absolutely cannot afford to make a bad game that would get poor sales, as that would put yourself in jeopardy.

He explains that, as a result of the increase in (technical) quality, most companies that make video games (and put a lot of money into their development), are going to take less risks than before. Instead, they will make more sequels and turn games into series. He’s well aware that he himself has been doing nothing but Zelda games for quite a few years now, so he doesn’t really want to lecture anyone with this.

For him, that’s the biggest change for the game industry: you cannot take as many risks as before. As for Nintendo specifically, he believes that they have found the right balance between new games from popular series and new IPs like Splatoon (that was really successful, despite that success not being guaranteed from the start).