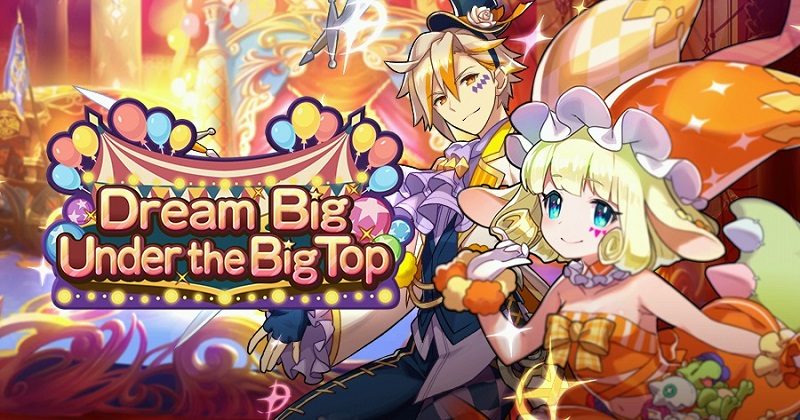 Today, a brand new event for Dragalia Lost was announced: Dream Big Under the Big Top. This one is a “Facility Event”. It will run from January 15th (this Tuesday) to January 25th, though rewards are available until February 1st. It pits your adventurers against bosses of the shadow element.

Notice 1: an issue is causing the Manticore boss to disappear in the air when playing the Boss Battle in co-op, making progress impossible. If this happens, you have to open the quest menu and select Give Up.

Ladies and gentlemen! Prepare for a magical circus unlike any you’ve seen before! Your hosts on this dreamlike adventure? An elegant dagger wielder and a lovely dragon tamer! With both the kingdom and the empire involved, you won’t believe the show they’ve prepared for you!

Thanks to this event, you can get an event-exclusive facility: Circus Tent. You get it automatically, and in fact, you cannot do much if you don’t build it right away in the Halidom. This building has special effects:

As you progress through the event’s story, you can level up the facility, and boost the very effects we just mentioned. To upgrade it, you need something called tent canvas, that you can get from event quests: just like in previous events, you can actually earn more of them by having adventurers equip event-specific Wyrmprints. Said Wyrmprints also have other effects.

The event features the following battles:

Important note: you need to clear Chapter 2, 2-1 on Normal in order to take part in this event. If you have just started playing Dragalia Lost, and therefore haven’t reached that part yet, make sure you do so asap if you want to take part in the event right away, and avoid missing a precious day!

As usual, make sure to keep an eye on the Events Content Updates and Summons pages to keep up to date with all that’s happening in Dragalia Lost!