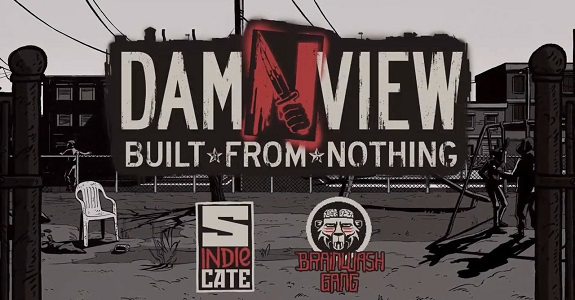 Today, Sindiecate Arts and Brainwash Gang announced a rather interesting game for the Nintendo Switch. It’s called Damnview: Built from Nothing, and it’s described as a “simulation sandbox game examining occidental culture and its different social classes”. It will be released in 2019.

Here’s a trailer, some details, and even some screenshots:

Damnview: Built From Nothing is told through the exploration of a decadent urban sprawl, all while working precarious jobs where you will either be absorbed into the system or cast out of society’s machine.

Damnview: Built From Nothing is a game about despair, the hostility of capitalism and the need for seeking a better future. The city takes on the role of an enormous monster to defeat only with your life and hard work – or maybe also with your fists and dirty money. How far you’re willing to go to survive and succeed in a place like this is in your hands and sometimes being smarter, meaner or just not giving a damn is the pathway to success.

Featuring a rich city teeming with different societal classes and cultures, players will discover the city through its people. Each character has its own story and purposes in life. The decisions you make in your relationships will help to determine how well you fare as you do what you need to survive.

Take on a variety of occupations: drive a cab; work in a video store or a laundromat; smuggle all sorts of goods or sell drugs in the alleyways. Through the money you earn you’ll manage your income, build your home from nothing and try to maintain your lifestyle. However, no matter how hard you work, society may have other plans for you.

Damnview: Built from Nothing (Switch – eShop) comes out next year in Europe and North America. The Upcoming Games page has been updated!