PM Studios have announced that Ever Forward will be released on August 10th in Europe and North America, at retail and on the Nintendo eShop. Retail copies come with a Digital Download Voucher for the Original Soundtrack (10 tracks).

Ever Forward centers on the story of Maya, a young girl lost in a strange world somewhere between reality and imagination. She is on a journey of discovery to unlock her memories and confront her fears as she seeks to unravel the secrets of the world. Players will find touching and engaging gameplay mixed with challenges found across a number of features. These include puzzles specifically designed for the “puzzle gamer” that will challenge and motivate them to solve each one.

Ever Forward (Switch) comes out on August 10th in Europe and North America.

Activision have announced that Tony Hawk’s Pro Skater 1 + 2 will be released on June 26th in Japan (just one day after Europe and North America). It will be available exclusively via the Nintendo eShop, with two editions available: 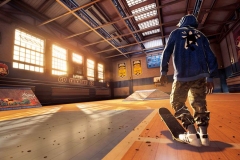 Here’s the latest two videos from Odd Tinkering on YouTube, featuring the restoration of a GameCube console and a broken GameCube controller: