Soedesco have shared some more details about the various improvements for Truck Driver, that will be included from the getgo in the Nintendo Switch version of the game:

The new damage system in Truck Driver adds visual damage to the player’s trucks and AI vehicles. In the current version of Truck Driver, players see the damage their truck has sustained on the SatNav. There’s chassis damage, engine wear and tire wear. These damages have impact on gameplay as well. Tire wear increases the braking distance, chassis damage results in steering deviation and engine damage breaks the engine. The upcoming update visualizes damage in 3D, by showing scratches and dents at the exact spot the truck was hit. AI vehicles also display accurate visual damage.

A completely new AI system in Truck Driver adds several significant improvements to the AI cars and pedestrian AI. This system introduces individual driver behavior types, such as aggressive drivers and cautious drivers. The pedestrians in Truck Driver now cross the streets and react to traffic. Additional types of AI vehicles, such as trucks and tractors are added and there’s a more realistic distribution of vehicle types and traffic throughout the map, with dense cities and quiet rural areas.

Truck Driver is currently running on Unity version 2017.4. This is upgraded to version 2019.2. The upgrade brings a better optimized game, which results in smoother frame rates, less stutters and, most importantly, the ability to add new features and content easier. It reduces file sizes for patches and brings an overall improvement in graphics with better shaders and textures.

Truck Driver (Switch) does not have a release date yet.

Working Zombies (Switch – eShop) does not have a release date yet.

MLB Advanced Media have shared some details and the list of key features for R.B.I. Baseball 20 (now available for pre-purchase on the Nintendo eShop in North America):

R.B.I. Baseball 20 (Switch) comes out on March 17th in North America, and later in Europe and Japan.

The latest Seasonal Event for Mortal Kombat 11 has been announced: it’s the Bottoms Up Tower Event, celebrating Patrick’s Day. It will run from March 15th to March 19th, with the following:

Ahead of the launch of Minecraft Dungeons, Merchoid have revealed a line of Minecraft merchandise: check out this page to see what they have on offer! 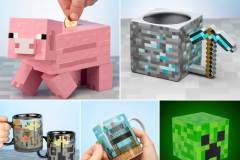 After a tough session of collecting logs, blocks and fighting Creepers, now you can kick back and enjoy a hard earned brew from one of our range of mugs on offer, from Heat Changing mugs to XL sized and one built to resemble the infamous Pick Axe found in game! Need somewhere to store all your hard earned coins? Luckily, the cutest animal in the game can double up as a trusty piggy bank, and whilst an apple a day might not keep the Creepers away, we feel like the Lanky Lime Creeper Light may just do the trick!*

*Merchoid cannot guarantee this lights ability to keep away Creepers