Deck13 have announced that Chained Echoes will feature a collaboration with ZILF (a British mathcore band). One of the minigames, Turtle Race, will feature an exclusive song by that band.

And here’s some details and the list of key features:

Players can expect a classic JRPG with its very own twists: While set in a fantasy world, “Chained Echo” also features custmoizeable airships and huge Mechs. The story driven game will feature a easy to learn but hard to master turn-based combat system and no weird random encounters: Every fight, every area will be handcrafted.

Chained Echoes (Switch – eShop) does not have a release date yet.

The latest Ninji Speedrun stage for Super Mario Maker 2 is now available. The speedrun even is live until January 27th, but as usual, the level itself is available permanently! 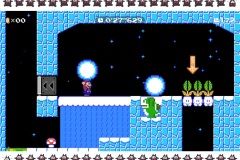 Here’s a couple of TV Commercials for Ninjala in Japan:

Here’s another video for the Dark Souls – Gravelord Nito Statue by First 4 Figures: