Activision have announced that the next Grand Prix for Crash Team Racing Nitro-Fueled. It’s called the Winter Festival, and it goes live on December 12th. Here’s what it includes: 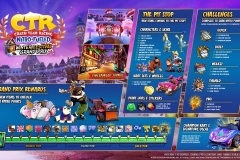 And here’s a promo video for it:

In order to celebrate their 15th Anniversary, QubicGames have announced the following:

In order to get the free games, you have to do the following:

And here’s the 10 games you can get for free:

Here’s a promo video for the sale and the giveaway:

Finally, click here for more details about the sale and giveaway!

Gearbox Publishing have shared the latest “Console Content Forecast” for Risk of Rain 2, detailing the various new features, improvements, and content updates coming to the game within the next few months.

If you’re curious about what’s coming to Risk of Rain in the (near) future, look no further: 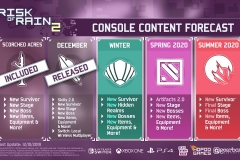 Famitsu occasionally run some surveys specifically aimed at western fans of games, and the latest one is now live. This time, it’s from players who have played Dragon Quest XI S: Echoes of an Elusive Age Definitive Edition (but also the original version on Nintendo 3DS and PlayStation 4) that they want to hear from. Click here to check it out!

If you think you can help us, please fill out the following questionnaire. Leave out any questions if you do not want to answer. Do not hesitate to share your favorite characters, scenes, any memorable moments of the series, and your comments. We’d love to hear from all “Dragon Quest” fans of the world!!

Nintendo have announced the Ring Fit Adventure Play Experience event for the united States. It will run from December 13th to December 29th at select malls across the country and will allow shoppers to try out Ring Fit Adventure.

Here’s the shopping malls where the event will be held: