Today’s Daily news: release date for Deliver Us The Moon on Nintendo Switch, but also…

Wired Productions have announced that Deliver Us The Moon will be released on Nintendo Switch on August 14th in Europe and North America.

Powered by Unreal® Engine 4, Deliver Us The Moon is set in an apocalyptic near-future where the Earth’s resources have been depleted and humanity looks to the stars. Nations band together to create the World Space Agency – an organisation tasked with solving the extreme energy crisis. The solution: colonization and exploitation of the moon’s natural reserves of Helium-3 to serve the energy needs of a growing Earth population. Suddenly, and without warning, communications with the Moon cease, and the energy source is lost. Plunged into darkness and without power, years pass as world governments come together once more to embark on a new mission – to re-establish the energy supply and with it hope for the human race.

Deliver Us The Moon (Switch) comes out on August 14th in Europe and North America. The Upcoming Games page has been updated!

InkyPen have announced that starting today, a wide variety of manga published by Kodansha USA are now available on the service. Fan of Attack on Titan, Your Lie in April, Fairy Tail, Battle Angel Alita, Parasyte, and many more? Then it’s time to download the app, available for free from the Nintendo eShop!

To celebrate the release of Trials of Mana worldwide, HACCAN (series artist) has shared two brand new illustrations for the game: 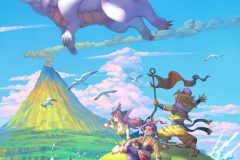 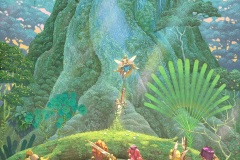 Teyon have announced their latest game for the Nintendo Switch: Cubers: Arena, an arena brawler/ twin-stick slasher game developed by Tomasz Dziobek. No release date yet, but the game has already been sent to Nintendo for certification, which means release is just around the corner.

SLASH, SMASH, SUMMON and BOUNCE your way to freedom! CUBERS: Arena, is an electrifying arena brawler/ twin-stick slasher game. Play as Baller, a slave fighting his way through an array of gladiators to reclaim his freedom!

Multifaceted and immersive game modes; 4 uniquely themed arenas, all with their own atmospheric effects and enemies, destructible environments, and fist-clenching boss fights in Campaign mode. An extensive line up of multiplayer (and solo!) mini-games such as Time attack, Defender, Sparring, Dodgeball, and many more! Try different skills, weapon type, upgrade items, socket gems or various difficulty levels for various outcomes in the fight!

Choose from an arsenal of over 100 unique weapons, armory, and skills to fight off waves of enemies. Two-handed weapon or a sword and shield combo? Gems to power up your weapons? The choice is yours! Finish a stage and receive gems which can be later used to increase the power of your items.

”Free-for-all” friendly fire system, meaning traps and enemies can hurt everyone, allowing for complex tactical options. Enemies can hurt each other too, so use it! Observe and plan who to defeat first and who will unsuspectingly aid you in battle! Dynamic 360 combat experience. Slash enemies and move in any direction. Fluid gameplay means players have more control.

Gain points by playing in campaign mode and mini games. PRO TIP: finishing a stage for the first time, gives you two times more awards and enemies, not killed in a combat, give you only a half of experience and points. Huge combo is a key to a huge score! Compete with other players for the highest score on the leaderboard! READY? LET’S FIGHT!

Cubers: Arena (Switch – eShop) does not have a release date yet. The Upcoming Games page has been updated!

Ultimate Games have announced their latest game for the Nintendo Switch: Infernal Radiation, a hardcore action game developed by Asmodev.

It’s a hardcore arcade game starring an exorcist battling infernal possessions and demons. As the developers indicate, Infernal Radiation distinguishes itself from other titles via its high difficulty, dynamic gameplay and battles with demonic bosses. As the creators indicate, Infernal Radiation is a unique game set in a world combining gothic and dark fantasy elements, filled with horror and black humour. The game also distinguishes itself by its exceptional audio and visual aesthetics.

In Infernal Radiation, the player will step into the shoes of an exorcist who finds himself on Halloween Island after the explosion of a power plant that produced energy from hellfire. As a result of this unfortunate incident, infernal radiation has contaminated many people and led to numerous possessions around the island.

The final version of Infernal Radiation will offer, among others, battles against 20 demons with unique abilities and battle patterns, as well as extensive player progression possibilities. The game will allow you to explore the island and discover its history, as well as use the services of people saved from demonic forces. Infernal Radiation will also feature a local cooperation mode.

Infernal Radiation (Switch – eShop) does not have a release date yet. The Upcoming Games page has been updated!

SONKA have announced a “new” game for the Nintendo Switch: 911 Operator Deluxe Edition. As the title indicates, it’s a re-release of 911 Operator that includes all the DLC released for it:

It will be released on May 1st in Europe and North America, with a 50% discount for players who already own the original version.

911 Operator Deluxe Edition (Switch) comes out on May 1st in Europe and North America. The Upcoming Games pages has been updated!