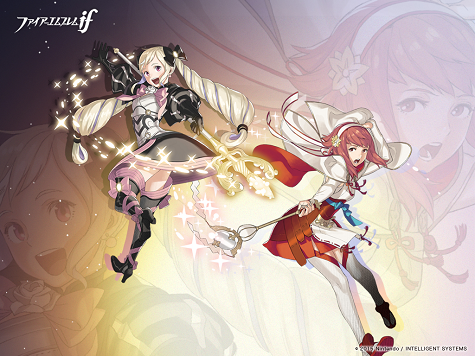 Here’s the illustrations and the wallpapers:

Fire Emblem Fates (3DS) comes out on May 20th in Europe.

A few months ago, Nintendo distributed some Nintendo-themed decoration items for Animal Crossing: Happy Home Designer. Today, it was announced that they would be distributed again in Japan, from April 1st (9AM JST) to May 1st (11.59PM JST). Just like last time, you will be able to meet Claude. If you take on his request (making a home that looks like a game store), you will be able to unlock the following items:

Today, Atlus updated the official website for Etrian Odyssey V, and added artworks for 3 of the classes:

You can check out customised setups for the characters, but only one type of character (out of 4) is available at the moment.

Here’s some gameplay footage for Witch & Hero 2, which came out yesterday in North America (it will be released next month in Europe):

Today, Nintendo UK posted a post with “Ten Great Ways to Use amiibo with Nintendo 3DS”. As the name implies, it lists 10 games that make extensive use of amiibo on Nintendo 3DS, though obviously, the list isn’t exhaustive. Click here to check it out!

Here’s the second episode of the series of promotional videos for Mario & Sonic at the Rio 2016 Olympics:

A quick heads up for those of you who happen to live in Japan: tickets for the Genei Ibun Roku #FE Premium Live ~Enter Kingdom~  concert will go live tomorrow at 10AM JST. Click here for more details!