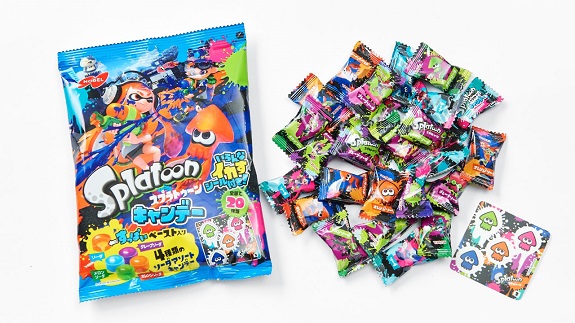 In Japan, Nobel is releasing two types of Splatoon candies:

Here’s a video from Nintendo UK, showcasing the Top 5 things to do in the “Ballad of the Three Cavaliers” demo for Bravely Second: End Layer.

Mega Man Legacy Collection (3DS) comes out on February 23rd in Europe and North America, and February 25th in Japan.

Hyrule Warriors Legends comes out on March 25th in North America (one day after Europe). If you pre-order the game at GameStop, you will get an artbook!

Pre-purchase the Hyrule Warriors Legends game, and receive a special-edition, soft-cover, 16-page character art book exclusively at GameStop. Learn more about key characters and view concept art for warriors and weapons, including the new hero Linkle and her mysterious compass – along with Toon Link, Tetra, and King Daphnes, who sailed across the Great Sea to save the world from evil!

Fire Emblem Fates came out last week in North America. Still don’t know whether to go with the Birthright or Conquest version? You can take this short quiz in order to find out!

Here’s the latest screenshots for Bokujou Monogatari 3tsu no Sato no Taisetsuna Tomodachi (the latest entry in the Story of Seasons series), which show horse riding. By riding a horse, you can travel much faster than on foot.

Bokujou Monogatari 3tsu no Sato no Taisetsuna Tomodachi (3DS) comes out in Early Summer in Japan.

In Japan, some official Mario-themed golf equipment was already released, but it looks like there’s more on the way. Today, Enjoy! Caddie Bag announced:

Here’s some pictures of the 4th Monster Hunter Festa 2016 event, courtesy of Famitsu:

Here’s some pictures for the Visual Book that comes with first-print copies of Medabots Girls Mission (out on March 10th in Japan):

Today, an update for Gakuyuu Unmei Kyoudoutai ~Friends in the same RPG~ was released in Japan. This new version (Ver. 1.1) features various bug fixes: click here for more details (only in Japenese)!