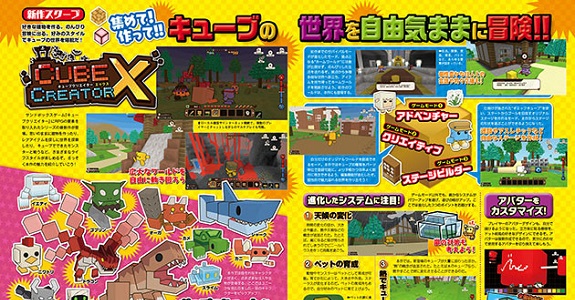 Cube Creator 3D is the game that basically saved Big John Games, and even landed them (and their Japanese publisher, Arc System Works), a meeting with Nintendo due to its impressive success in Japan. An expanded version was released at retail on Nintendo 3DS, last year (though only in Japan), and now, the “series” is headed to the Nintendo Switch with a new game called Cube Creator X.

Cube Creator X will feature multiplayer, playable both locally or via the internet. The Stage Builder will let players choose the shape of the stage, which is pretty handy for players who know in advance what they’re going to build.

But that’s not all: Cube Creator X features weather changes, but also pet training, and avatar creation/customisation. Some “advanced” concepts also made it into the game, such as heat for example: you will get charcoal by burning a cube of wood.

The preview scan from Famitsu also confirms the return of the three game modes from Cube Creator DX:

Cube Creator X will be released on April 26th, and while we don’t know how much it will cost, it’s already confirmed there it will be available at retail. No word on a possible western release, and while it’s likely Europe and North America will get it eventually, it’s not guaranteed. Cube Creator DX remains a Japan exclusive to this very day, after all…

Here’s the preview page from Famitsu:

Cube Creator DX (Switch) comes out on April 26th in Japan. The Upcoming Games page has been updated!