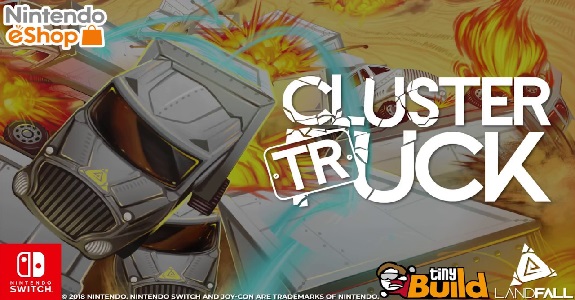 On Saturday, during the first Hello Switch presentation, tinyBuild announced several games for the Nintendo Switch. One of them is called Clustertruck, and it’s described as “chaotic physics truckformer” game developed by Landfall. It will be released next month in Europe and North America, where it will cost $14.99.

In this game, you get to play as a truckdriver, who has a pretty simple goal: reach the end of each level. The problem is, you have to deal with other trucks, and their drivers are quite terrible! The game offers no less than 100 levels, with a campaign mode taking you on a hollywoodesque journey through many worlds. But as different as those may be, they all have something in common: they’re filled with things that try to kill you.

One thing this game will teach you is that a game of “The floor is lava” is always more fun when you’re driving a truck!

Clustertruck (Switch – eShop) will be released next month in Europe and North America!