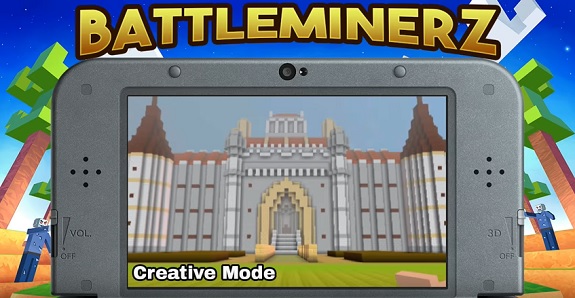 Until Minecraft: New Nintendo 3DS Edition was released, a few weeks ago, Minecraft had never been available on the Nintendo 3DS before. Quite a few developers jumped on this opportunity and released their own Minecraft clones. For most of them, this was a pretty successful endeavour, such as Woobly Tooth, who is back on Nintendo 3DS with Battleminerz (an expanded version of Battleminer).

So, what’s new in Battleminerz? For starters, we have an infinite open world, featuring new biomes. Players can customise the look of the game with texture packs, but also of their own character with character customisation. Venturing outside at night is also bound to be a pretty risky endeavour, due to the many zombies roaming around.

Back to the biomes mentioned above: they each have their own wildlife, with various animals for you to meet and… ride. Always dreamed of exploring the world while riding a polar bear? Well, you will be able to in Battleminerz.

Here’s the debut trailer for Battleminerz:

Finally, here’s the key features of the game:

Battleminerz (3DS – eShop) will be released this Winter in Europe and North America. The Upcoming Games page has been updated!