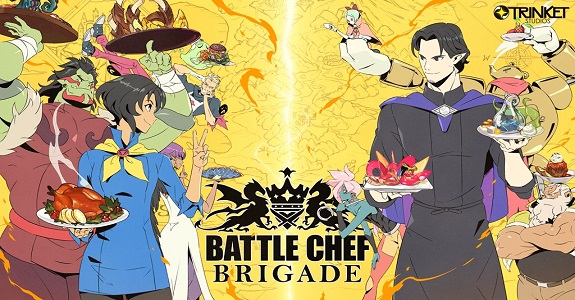 If there’s one thing absolutely all games showcased during the Nindies Summer Showcase on Wednesday have in common is that they all feel pretty fresh and unique. Battle Chef Brigade, which was announced for the Nintendo Switch during this presentation, is obviously no exception.

In this game, you get to play as a fantasy chef (either an Orc, Elf, or a Human), and you have to hunt dangerous monsters to get your ingredients. After that, you have to use those very ingredients to make culinary masterpieces in an intense tournament, before the critical eye of judges.

What’s pretty interesting about Battle Chef Brigade is that it’s a mix between combo-based action gameplay (hunting) and puzzle-based gameplay (cooking). It all makes for a pretty interesting experience, and one that seems to work pretty well if the trailer below is any indication!

And here’s a trailer and some pictures:

Oh, and if you’re wondering how the developers came up with such a unique concept for their game, here’s what they had to say about it:

Battle Chef Brigade is the type of game that we quit out jobs to make, even if we didn’t know it at the time. The game’s genesis was in the communal lunch breaks we’d take while pitching game ideas for Trinket’s third title. These meals would often take place around the TV, which without fail was always tuned to a cooking show of some kind. At some point we realized that a game about cooking that did justice to the creative fire of talented chefs was way better than any of the ideas we’d yet had. From there we spent a lot of time prototyping Battle Chef Brigade’s cooking. We wanted to create a mechanic that wasn’t just rote recipes and steps, but we weren’t really sure what that meant. Though it took far longer than we expected, each prototype was invaluable for nailing down which aspects of cooking could be nicely abstracted into clear, fun mechanics and which were too clunky. On the programming side, we’ve been able to keep building on our years of industry experience. Integrating new characters, foods, and chef challenges will be a straightforward process since we’ve been preparing for them all along. We invested a good chunk of our time building a robust combat system that integrates into our animation tools. Our biggest remaining tasks are related to our illustrated, hand-animated art style. There are very few shortcuts to creating hand-drawn animations and environments. Our tools help smooth out the process, but each chef and monster still requires a lot of Photoshop time!

As you can see for yourself, the developers are quite serious about making this game more than “just” a gimmicky experience, but rather a truly unique one!

Battle Chef Brigade (Switch – eShop) will be released this Fall in Europe and North America. The Upcoming Games page has been updated!