The Ace Attorney series and the Nintendo 3DS, it’s a bit of a love story. Ever since the handheld was released, back in 2011, a total of 6 games were released (with the last one coming in August in Japan):

And it looks like Capcom isn’t quite done with Ace Attorney on Nintendo 3DS, as a 7th game seems to be in the work. According to a listing on the Game Rating and Administration Comittee in Korea (spotted by Gematsu), Capcom is working on a Nintendo 3DS port of Apollo Justice: Ace Attorney, the 4th entry in the series. 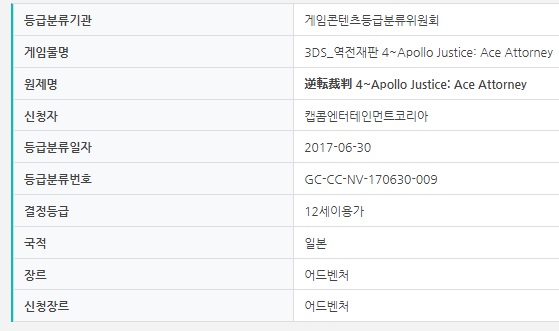 Naturally, we know literally nothing about this game, but it’s probably safe to assume it’s going to be a port similar to the Phoenix Wright: Ace Attorney Trilogy. In other words: assets based on the HD assets from the mobile version, stereoscopic 3D, and various other minor improvements. It’s highly unlikely that this is a remake, or a straight port (both wouldn’t make any sense).

Based on the timing of this listing, it’s likely that Capcom will announce this Nintendo 3DS port of Apollo Justice: Ace Attorney just before the Tokyo Game Show, with the first trailer (and maybe playable demo) at the actual show.

A western release is definitely a possibility, considering Apollo Justice: Ace Attorney has already been fully localised in English. However, just like the Phoenix Wright: Ace Attorney Trilogy, it’s more than likely it will be an English-only, digital-only release in Europe and North America.

With this Nintendo 3DS version of Apollo Justice: Ace Attorney, all the mainline entries in the Ace Attorney series will be playable on Nintendo 3DS in a native version (aka: no retro compatibility, or straight port).