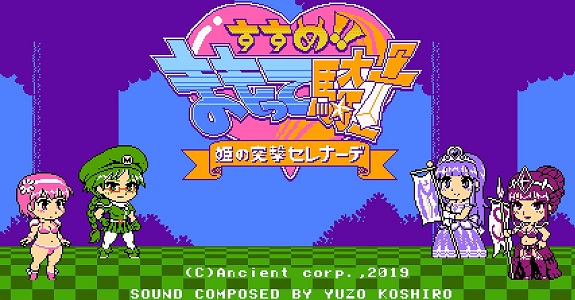 During a concert held on December 1st in Japan, Ancient announced not one, but two games for the Nintendo Switch: Gotta Protectors: Totsugeki Serenade and Ooritsu Anapoko Gakuen, both releasing next year in Japan!

The premise of this one is pretty much the same as other entries in the series: there’s a princess that you have to protect at all costs from enemy assaults. But this time, there’s a new gameplay element: a castle that moves along a railroad. When the castle reaches checkpoints, a large number of enemies and a boss attack. At the end of the railroad, there’s the enemy castle: your goal is to destroy it!

You control up to 3 characters in battles, and you have to choose their class from among 8 possible classes (such as Archer, Fighter, Amazone, etc.). You can freely switch from one to the others at any time during battle. If you take too much damage, you can be KOed, but it’s not the end for you: you can still be resurrected.

On the other hand, if the princess is attacked and takes too much damage, it’s game over for you. You can protect her with barricades, and when she’s in the castle, it takes damage in her stead. However, that castle isn’t indestructible: if it takes too much damage, it will fall and will leave the princess defenseless for a certain amount of time. In other words, you have to defeat as enemy as possible while making sure the barricades and the castle hold.

Here’s the first pictures for the game:

Gotta Protectors: Totsugeki Serenade (Switch – eShop) comes out in 2019 in Japan. The Upcoming Games page has been updated!

Ooritsu Anapoko Gakuen is a brand new game, and more precisely a turn-based RPG that will feel pretty familiar to JRPG fans. Instead of anlong, epic story, it features short scenarios. The game takes place at Anapoko Gakuen, where more than 100 students (each with their own personality) have enrolled, and carry the very fate of the world on their shoulders.

Unfortunately, developement hasn’t progressed very far, so that’s pretty much all we know for now!

Ooritsu Anapoko Gakuen (Switch – eShop) comes out in 2019 in Japan. The Upcoming Games page has been updated!