Here’s the official artwork for Athena Cykes, as well as pictures of the stage show at the Jump Festa 2016:

Today, during a stage show at Jump Festa 2016, Capcom revealed some new details about Ace Attorney 6 (coming out next year, on Nintendo 3DS). First of all, it’s been confirmed that Athena Cykes would be in the game, though that’s all we know so far. But on the screenshot below, we can also see a poster with Trucy, which implies she might also appear in the game. And it looks like the Gramarye might be involved, too! 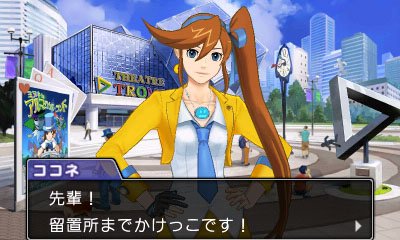 What’s more, during a demo session, Capcom revealed that free investigation would be back in this game. In Phoenix Wright: Ace Attorney – Dual Destinies, you could only investigate when the game told you to, unlike the previous entries where you were free to move around and examine things as you pleased.

Unfortunately, that’s all the news for Ace Attorney 6 for now, but we should get more in the upcoming days!

Ace Attorney 6 (3DS) will come out next year in Japan. A European and North American release has already been confirmed.

Before the stage show at the Jump Festa 2016, details about the Ace Attorney anime series were revealed yesterday. We learned that the anime will be produced by A-1 Pictures, with Ayumu Watanabe directing, Atuhiro Tomioka as Head Writer, and Kaoru Wada composing the soundtrack. We also have the cast for the main characters:

The Ace Attorney anime will air every week at 5PM, on Saturday (which is apparently the timeslot for The Kindaichi Case Files R), on Yomiuri Television and Nippon Television channels. Apparently, Shu Takumi will serve as supervisor for the anime, which will cover the first two games (Phoenix Wright: Ace Attorney, and Phoenix Wright: Ace Attorney – Justice for All), but will also feature original episodes. This indicates it should last 2 cours (6 months), with ~24 episodes.

Finally, it was also announced that the anime would get a manga adaptation by Naoyuki Kageyama, in V-Jump magazine.

Here’s the poster for the anime series, as well as artworks of the main characters:

The Ace Attorney anime series will air in April.