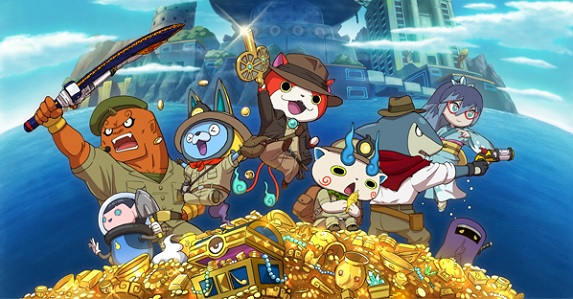 This second entry of Yo-kai Watch Busters takes place Karakuri Island, where the great treasures of pirates is said to slumber. You get to play as Jibanyan and the gang, who go on an adventure looking for that very treasure. Unfortunately, that’s pretty much all we know about the game for now, with more details coming in the upcoming weeks (most likely in mid-September, in CoroCoro magazine).

The second announcement is the release date for the next major update for Yo-kai Watch 3, Ver. 4.0. It will be available at the end of the month (literally!), on August 30th. Unfortunately, Level-5 doesn’t reveal anything else about the update, so for the list of new Yo-kai added, make sure to check out this post!

Finally, here’s an updated trailer and a couple of commercials for the game:

The Upcoming Games page has been updated with both game and date!