Back when Yo-kai Watch 3 was originally announced, during the Level-5 Vision 2015 event, Level-5 explained that the game would get a series of major updates: Ver. 2.0, Ver. 3.0, and Ver. 4.0. Many interpreted this as “Yo-kai Watch 3 will not get a third version like Yo-kai Watch 2”, and it looks this is not the case.

In the latest issues of CoroCoro magazine, Level-5 revealed Yo-kai Watch 3: Sukiyaki, which will be released on December 15th. It will include three new main elements:

Here’s what the boxart of Yo-kai Watch 3 Sukiyaki looks like: 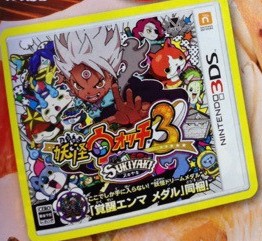 Players who get the physical copy at launch will get an exclusive Awakening Enma medal. For those getting the digital version, they will get exclusive Yo-kai (including a special USApyon).

Yo-kai Watch 3: Sukiyaki will be released on December 15th in Japan. It has been added to our Upcoming Releases page!