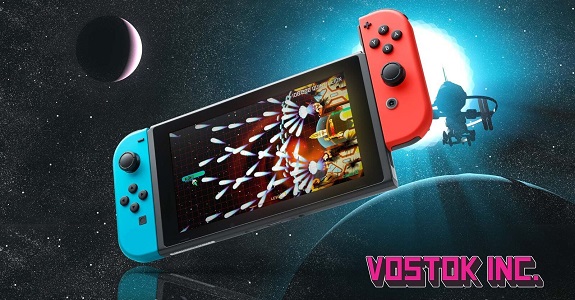 Developed by Nosebleed Interactive, and published by Wired Productions, Vostok Inc. is headed to the Nintendo Switch later this year! For those of you who never heard of this game before, it’s a twin-stick shooter (with some mini-games) where you get to play as a “corrupt, narcisstic yuppie”, and more precisely the newly-appointed CEO of Vostok Inc.

Your goal in this game is pretty simple: becoming rich… filthy rich, that is. And you’re ready to play dirty if that means earning even more money. Who cares about conscience, heh? In Vostok Inc., all that matters is money. Plain and simple!

You get to pilot your very own ship, in order to explore and (more importantly) exploit more than 40 different planets, found across six solar systems. Your quest for self-enrichment truly knows no bounds… in more ways than one.

It all starts the same way: you land on a planet, begin colonisation, and build factories. Once money starts flowing, you can upgrade your ship’s weapons and augmentations. In fact, you can also find and recruit managers, consultants, and executives, scattered throughout the galaxy. Because earning money is nice, but having others do the work for you is even better!

And here’s a trailer and some pictures:

Vostok Inc. (Switch – eShop) will be released later this year in Europe and North America. The Upcoming Games page has been updated!