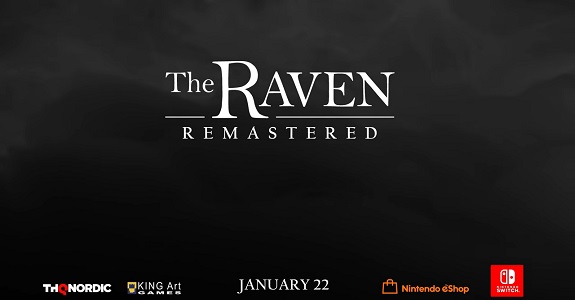 In the past few years, THQ Nordic has acquired (and is still acquiring!) the rights to many games and series, and so it’s no wonder the publisher would end up with quite a lot of games for the Nintendo Switch. In fact, the publisher announced no less than 3 games at once yesterday: The Raven Remastered, Sphinx and the cursed Mummy, and The Book of Unwritten Tales 2.

They will all be released in early 2019 in Europe and North America at retail and on the Nintendo eShop, and they will cost 29.99€ / £26.99 / $29.99 each. You will find details, but also a trailer and some pictures (including boxarts), for each title below!

London, 1964. An ancient ruby is stolen from the British Museum. At the crime scene: a raven feather. Is somebody trying to follow in the footsteps of The Raven, the legendary master thief who disappeared years before? Constable Anton Jakob Zellner finds himself in the middle of the kind of murder mystery he so far only knew from reading his favourite crime novels. Nothing is what it seems. Everyone has something to hide. And the Raven is always one step ahead…

The Raven Remastered (Switch) comes out on January 22nd.

Sphinx and the cursed Mummy

Sphinx and The Cursed Mummy is an original 3rd person action-adventure inspired by the mythology of ancient Egypt. Travelling the world via magical portals to foil the evil plans of Set. Sphinx’s Journey will require all his wits, agility, and special powers. He will also rely on his reluctant hero friend, The Mummy, to help when being inconspicuous is the only solution. By finding the stolen magical crowns of Egypt, Sphinx can stop Set and save the world.

Sphinx and the Cursed Mummy (Switch – eShop) will be released in Early 2019.

The Book of Unwritten Tales 2

In The Book of Unwritten Tales 2 the player controls four different characters in a lovingly created fantasy world, and must solve some tricky logic puzzles in classic point-and-click style. The thrilling story and the usual BoUT humour with its numerous nods to fantasy elements and colourful characters guarantee over 20 hours of fun gameplay.

The Book of Unwritten Tales 2 (Switch) comes out on February 5th in Europe and North America.

Finally, here’s some pictures (screenshots, boxarts) for all three games: