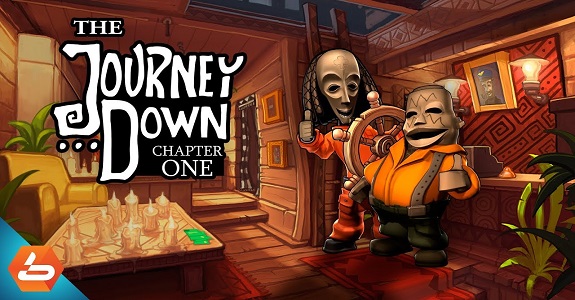 Are you among those who believe there just isn’t enough point and click games on Nintendo Switch? If you are, then you’re definitely going to love SkyGoblin and BlitWorks’ announcement! Today, they revealed that The Journey Down, the acclaimed point and click series (with an Afro-Carribean twist) is coming to the Nintendo Switch!

Uncover secrets and reveal plots on a journey that spans from the sprawling metropolis of St. Armando to the ancient jungles and temples of the mythical Underland. This bundle includes The Journey Down: Chapter One, Two and Three.

The adventure starts in a shady corner of Kingsport Bay, at the outskirts of St Armando, where Bwana and his trusted sidekick Kito struggle to make ends meet at their run-down gas station. Little do they know that they are about to be thrown into a spine-tingling adventure that will take them far from home and right into a twisting plot of corruption and danger. Get ready to embark on an epic journey of laughs and brain-teasing adventure!

And here’s details about Chapter 1:

In the first chapter of The Journey Down, the search for a lost journal leads to forgotten secrets of the mysterious Underland. Follow Bwana and Kito as they puzzle their way forward and begin to uncover the true fate of their long lost father, Captain Kaonandodo.

The Journey Down will be released in several episodes (or chapters): there’s 3 of them, and the first one costs 9.99€ / $9.99. If you prefer to get them all at once, you will be able to buy a Trilogy bundle, sold 39.99€ / $39.99. Since the press release mentions you can save money by buying this bundle, that means Chapter 2 and 3 will be more expensive than the first one.

But there’s another reason to get the bundle (besides convenience purposes and saving a few bucks): it gives you access to Chapter 2 and 3 before they’re released individually!