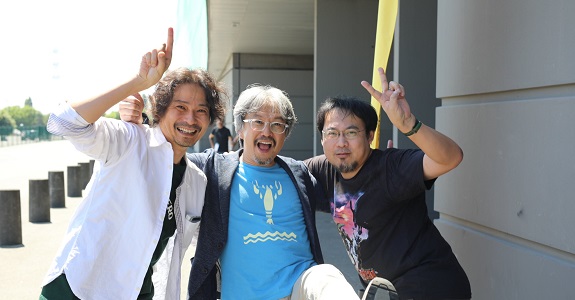 Update: the full recording of the Art of The Legend of Zelda Master Class at the Japan Expo 2017 is now available with English subtitles!

In this post, you will find our transcript of the event, unfortunately based on the various tweets from Nintendo France as the event is not livestreamed. If and when a recording is uploaded, we will make sure to update this post as soon as possible!

First, here’s concept-art from Yusuke Nakano, for Link in The Legend of Zelda: Ocarina of Time. As you can see, he imagined him as a real playboy, and a pretty musucular man.

And here’s the very first 3D model for Link:

During development, Satoru Takizawa was told by the development team that he had only 6 months to come up with 12 huge bosses.

He told them “A huge boss every 2 weeks? Easy peasy!”. It looks like Mr. Takizawa was quite the reckless youth, back in the days…

Regarding Ganondorf, Mr. Takizawa was quite disappointed by the 3D render, since it wasn’t 100% faithful to the illustration he created (due to technical limitations on the Nintendo 64).

Next, The Legend of Zelda: The Wind Waker. At the time, Satoru Takizawa was only given two “indications” regarding the game: an adventure upon the seas, and a young boy filled with energy.

At first, Eiji Aonuma wasn’t really convinced, but as soon as he saw Link come to life, he found him quite adorable.

For The Legend of Zelda: Twilight Princess, Mr. Takizawa wanted something radically different: a more mature and muscular Link. Here’s concept-art of an old version of Link, in his 30’s:

As for Midna, her design was actually chosen via an internal competition!

Curious about the various insignia found around Hyrule, in The Legend of Zelda: Breath of the Wild? They’re actually based on patterns from the Joumon Period!

Next, Nintendo showed a short clip from the second DLC Pack for The Legend of Zelda: Breath of the Wild, The Champion’s Ballad. It was confirmed that you will still play as Link, but that you will get to know about Zelda and her side of the story.

During the Master Class, Eiji Aonuma was wearing the same lobster shirt as Link in The Legend of Zelda The Wind Waker, and joked that it’s definitely better that Link is the one wearing (he’s a bit too old for that t-shirt himself). Yes, that’s a pretty roundabout way to announce that the lobster shirt will be included in the second DLC Pack for The Legend of Zelda: Breath of the Wild!

Next, there were several announcements regarding official The Legend of Zelda books:

Finally, here’s various pictures from the Master Class (including before and after):