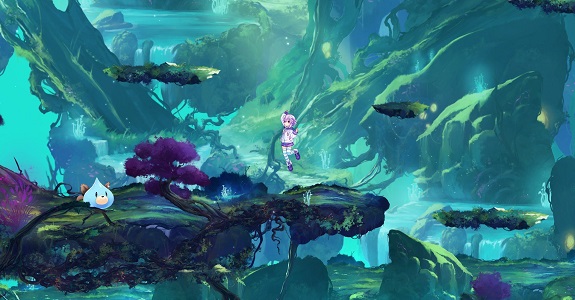 Earlier this week, Idea Factory International announced that Super Neptunia RPG, a 2D side-scroller based on the Neptunia series and developed by Artisan Studios, will be released this Fall on Nintendo Switch. The game will offer Japanese and English voice options, as well as English and French subtitles and text.

There was once a primitive form of entertainment software that ruled the world: 2D games. In one of infinite dimensions, the world of Gamindustri exists… a world where 2D games reign supreme. An organization fiercely devoted to these games rules over this vibrant world. They are known as Bombyx Mori and their devotion comes with a heavy price.

Citizens of Gamindustri are forced to offer 2D games to Bombyx Mori as taxes. Those who dare to use new technologies or create games that don’t meet their standards risk being banished to the Trial Grounds. It is in this Gamindustri, a dark world with no real future in sight, that a girl wakes from her sleep.

Her name is Neptune, and with a strange book in hand, she sets off on the journey of a Hero.

What’s interesting about this announcement is that Idea Factory International specified this would be the “first Neptunia game to release on the Nintendo Switch”, implying that more of them are on the way!

Super Neptunia RPG (Switch) comes out this Fall in Europe and North America. The Upcoming Games page has been updated!