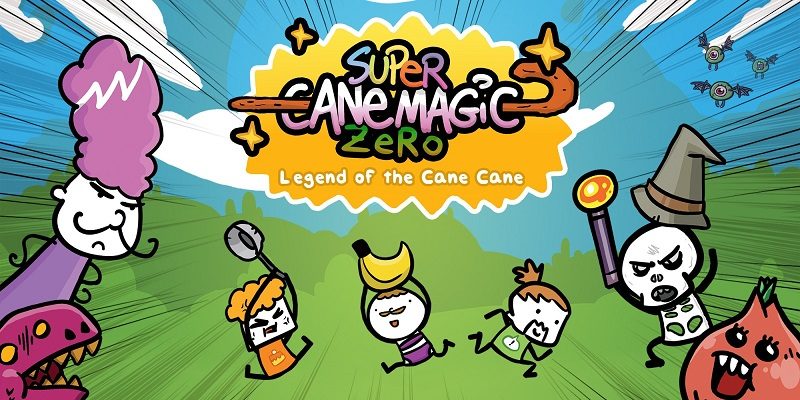 On this page, you will find all there is to know about the Software updates for Super Cane Magic Zero on Nintendo Switch (originally released on May 30th, 2019 in Europe and North America, and August 29th, 2019 in Japan)

PUNCHES!
Players can now attack and dash even without weapons or items equipped. The basic actions are much weaker compared to having a real weapon in hand, but the game should feel much more responsive and fun now. Being able to punch and dash in every arena should also make matches much more interesting!

NEW CHARACTER: Missy Talia
From the pages of Sio’s Scottecs Magazine, super-heroine Missy Talia joins your team, ready to unleash the power of PIZZA! Missy has high survivability and can recover health and mana by collecting Salami. Her “Mozzarella Beam” special power doesn’t inflict much damage but can quickly stun many enemies from a distance.
To unlock Missy Talia talk to her in Nevola Park after rescuing Biscuit the Wizard!
NEW ARENA: Pizzinapple
This freshly baked arena is designed for intense, close-quarters brawls. The play-field is surrounded by lava and the only available weapon is a large pineapple! What secrets does the pineapple hold? None.
Angry Fungi
We added two new enemy types to the Minestronya area
Angry Chests
A monster chest can now appear instead of any regular treasure chest. When opened, these chests drop no treasure and spawn a deadly Skeleton Mini-boss. Kill it for a greater reward!
Revised Rage
Enemy rage was rethought entirely. When enemies recover from stun or get enraged by other effects they are now faster and “unstoppable”. This means that their actions will not be interrupted when they get damaged. On the other hand, they don’t get a damage and critical boost anymore so if you act carefully, you’ll surely manage their more predictable attacks.
Revised Shield Counter
We tweaked the effect of shield counters for both players and enemies. When a counterattack effect is triggered by using a shield, the character now gets a damage reduction and the “unstoppable” bonus, while the critical chance of each hit rises from 50% to 100%. Also, a counterattack doesn’t grant a 10% damage boost as before, but the duration of the other bonuses is increased. These changes allow for some new interesting character builds that focus on critical damage!
More and Re-balanced Unique Items
We re-balanced several old unique items and added 3 new ones to the list.
Acquiring unique items should be easier than before. We increased the chance for a unique item to be sold in a shop. We also added 4 more unique chests scattered around the game world, for a total of 7. Explore the most remote and dangerous places of WOTF to find them!
Levels:
We tweaked a few levels in the early hours of the game campaign and optimized several areas. We also added extra loot and new connections between early levels to allow multiple exploration paths. If you look carefully, you should also find a new challenging “mini-dungeon” in the Poptarts area.

Bug Fixes and other tweaks:

How to download updates for Super Cane Magic Zero for the Nintendo Switch?

To download the updates for Super Cane Magic Zero, you have three options: