During the Splatoon Direct, in May, Nintendo announced that new content (map and weapons) for Splatoon would be added regularly to the game. The point is obviously to keep players interested, so that they keep on playing without getting bored with the same weapons and maps (even though everything was simply locked away on the disc, so far).

And this week, we’re back to the regular schedule for new content, with two new weapons added on Wednesday, and a new map on Saturday (this evening for North America). This time around, the new map is Moray Towers, which is one of the maps found via datamining, which is also seen in the Splatfest promotion video.

Here’s some creenshots for this new map:

The Moray Towers map will be added at the usual time, which means July 11th at:

SplatFest are special 24 hour long events that will take place regularly in Splatoon. During those, players have to answer a question (like “Do you prefer cats or dogs?”), before joining a team depending on their answer. At the end of each SplatFest, the team with the most points win, so if you want to show people why cats are so much better than dogs, you better step up your game during Turf Wars!

A few hours ago, Nintendo announced that the second Splatfest for the Americas would take place on July 17th. This time around, the theme will be “Roller Coasters vs. Water Slides”. 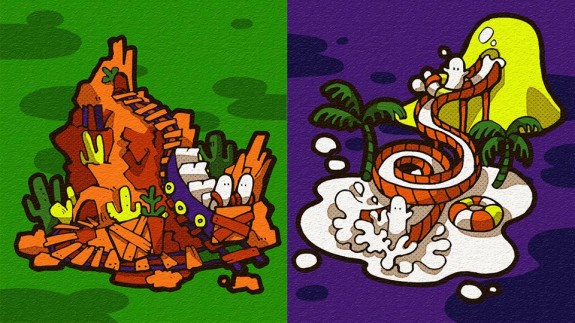 The Splatfest will take place on July 17th, at:

NB: this Splatfest is only for players with a North America copy of the game.

Did you like the real-life Inzooka we showed you the other day? If yes, here’s another one: