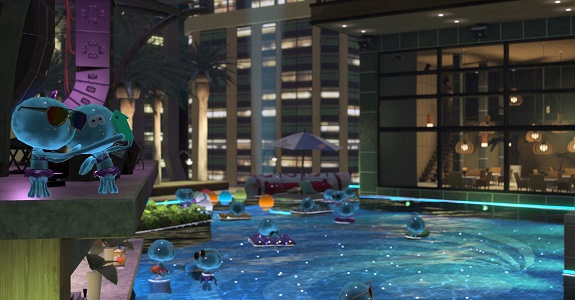 And today, the Squid Research Lab shared some more details about the two new weapons that were showcased in the video clip, and that will be included in next month’s update (the weapon and stage update on July 1st), complete with some actual footage of the weapons in action.

The first weapon is called “Kugel Shriver” in Japanese (Ballpoint Splatling in English), and it’s a new type of Splating weapon equipped with a transmission system. When you begin firing this weapon, instead of the high-speed, continuous shooting of regular Splatling weapons, your range is pretty short, and your aim shakes a lot.

However, a few moments later, your shots stabilise, and while they do become slower, they also become more accurate and allow you to reach even further targets than usual with great accuracy. What’s more, you can recharge your weapon while shooting, by pressing ZR.

The second weapon is called “Explosher” in Japanese, and it’s a new kind of heavyweight slosher. When ink hits terrain (or opponents), it “explodes” and splashes things nearby. It’s definitely a bit on the slow side, but if you can manage to take advantage of the weapon’s unique trajectory and its ink explosions, your opponents will come to fear you and your trusty new weapon.

By the way, it looks like hot hair is coming out of the Explosher’s opening…

Finally, here’s some footage and some pictures of the two new weapons:

As for the new stage, it’s called Albacore Hotel. The stage is actually set at the very swimming pool located on the roof of the hotel. It’s pretty popular among Inklings (and other species), who can feel like they are at a holiday resort while they’re in fact in the middle of the city, surrounded by tall buildings.