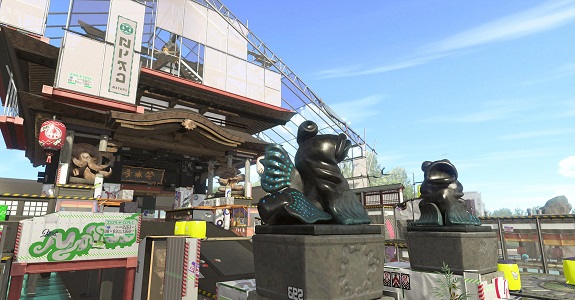 Following the latest Nintendo Direct presentation, it was announced that a new stage will be added to Splatoon 2 in early October.

Yesterday, the Squid Research Lab shared some additional details about this new stage, which will be the very last one. It’s called “Mutsugo Temple” in Japanese and Skipper Pavilion in English. It happens to be a really popular sightseeing spot located near the Inkopolis Square, and also a popular spot for Turf Wars. Even though the place is undergoing renovations, young Inklings do battle there, among the scaffolding and fences.

Next: details about the new music tracsk. They’re performed by a band known as SashiMori: a brand new band from the ‘post-OctoSquid’ movement. They were originally a “Loud Rock” band with a focus on strong vocals, with three members: Koi, Tachuo, and Scaryfoot, but they ended up disbanding.

After that, they reunited and got a new band member: a 10 year-old DJ, and a prodigy. And so SashiMori was reborn as a completely new band.

The first music track is called “Champon Chant” in Japanese (English title: Chopscrewey), and features a mix of strings and rock sounds. Since the band does not have a vocalist anymore, the voice heard in the song are actually samples created by the DJ by remixing ancient records. The song also features a chorus.

The second music track is called “Entropical” in Japanese and English, and it’s the one featured in the trailer for Ver. 4.0.0 from the latest Nintendo Direct presentation. It features strong female vocals and rapping lines. It seems that once again, the voices were created by mixing various samples, but they sound quite different from what you would usually hear coming from sea creatures…

The two new music tracks will be added with the next Software update, to be released in early October.