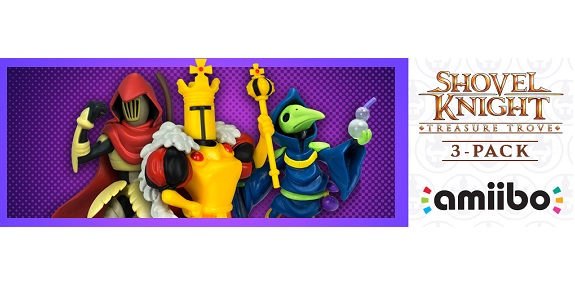 Third-party publishers are free to release their own amiibo if they want, but for some reason, very few of them actually have. Yacht Club Games is one of the few companies that actually jumped on the occasion, and released a Shovel Knight amiibo alongside the retail release of the game on Wii U and Nintendo 3DS.

And it looks like they were more than satisfied with the sales of that amiibo, as they announced that three more figures would be released next year. Those figures are Plague Knight, Specter Knight, and King Knight, available only as part of a 3-pack.

Here’s a trailer and some pictures for those amiibo:

Just like the original Shovel Knight amiibo, those three new figures will allow players to enjoy exclusive features in-game. For starters, each amiibo unlocks an exclusive armour set for its characters. Said amour sets are only cosmetic, which means you can mix and match them with your favourite armour effects.

There’s also some new amiibo challenges, that will really put your skills to the test. Finally, those amiibo will allow you to have Fairy Companions.

Naturally, the new amiibo will be compatible with all versions of Shovel Knight (Nintendo Switch, Nintendo 3DS, and Wii U)!

The new Shovel Knight amiibo will be released in Europe and North America next year. The Upcoming Games page has been updated!