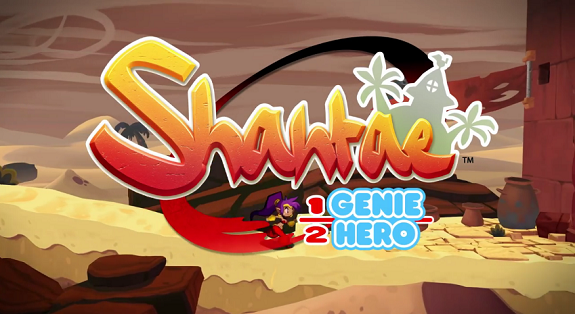 Earlier today, WayForward posted the latest Kickstarter update for Shantae: Half-Genie Hero. This time around, they had some major news to share with fans, starting with a brand new piece of key art. Until now, they simply used the in-game sprites, but here, they had Inti Creates and KOU (the same illustrator from Shantae and the Pirate’s Curse) create a distinctive style for the Shantae: Half-Genie Hero key art.

This style will be used in close up images like talking portraits, digital cover art, or in advertisements. It will also start replacing the previous key art starting with this year’s E3 promotions:

Fire and Forget (one of the stretchgoals during the Kickstarter campaign) is a storyline where Shantae gets replaced as Scuttle Town’s Guardian Genie by a rival genie, who is snotty, stuck up, and none too easy to get along with. If you’re a backer, you can vote for your favorite design for that rival genie by clicking here!

And good news for the many fans who requested a retail release of Shantae: Half-Genie Hero! WayForward has managed to enter into discussions with “top-tier publishers” for a retail release of the game. It looks like more details will be announced closer to E3, as things haven’t been finalised just yet.

In the mean time, here’s some important clarifications regarding this retail release (which seems all but confirmed at this point):

Shantae: Half-Genie Hero (Wii U) is coming out later this year.