Good news for fans of the Rune Factory series: the long-awaited Rune Factory 4 Special finally has a release date in Europe! Initially slated for a 2019 release, this enhanced port of the Nintendo 3DS cult-classic is headed to Europe on February 28th. Based on this, it’s pretty safe to expect the North American release to end on February 25th.

Marvelous have also confirmed the language options, which are as follows:

Starting today, the game is available for pre-purchase on the Nintendop eShop for 39.99€ / £32.99 / AU$59.95. If you do pre-purchase the game, you will get the Swimsuit DLC as a bonus. The only other way to get it for free is to buy the Archival Edition on the Marvelous Store. 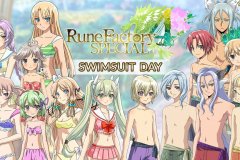 But what’s included in the DLC? The following:

Finally, Marvelous share some details about new additions to the game:

Rune Factory 4 Special (Switch) comes out on February 28th in Europe, and later in North America. The Upcoming Games page has been updated!