A few minutes ago, GungHo revealed the third (Japanese) trailer for Puzzle & Dragons Mario Super Mario Bros. Edition, showcasing some of the gameplay mechanics of the game and more. For starters, it shows how you need to pick up your team before you head into battles. It’s a really important step, as characters have Leader Skills (and more) that will be useful to take the advantage against the enemies. 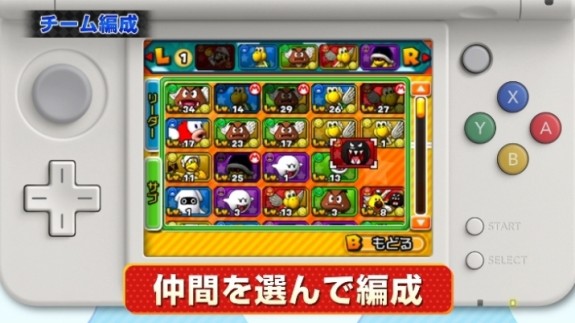 When you beat enemies, they can become your allies and fight with you. You can even get assist characters, who will help you with their Assist Skills. You can also get those by trading Friend Cards, via StreetPass: those also allow you to trade records from the Score Attack mode.

The trailer also showcase some of the worlds found in the game, which are the traditional (New) Super Mario Bros. environments: desert, clouds, haunted forest, and more. Players will also be able to visit Toad Houses, to get power-ups, use items to power-up special skills and allies… you can even get items thanks to mystery boxes!

Puzzle & Dragons Super Mario Bros. Edition (3DS) comes out on April 29th in Japan, May 8th in Europe and May 22nd in North America. In the west, the game will come in a bundle including Puzzle & Dragons Z.