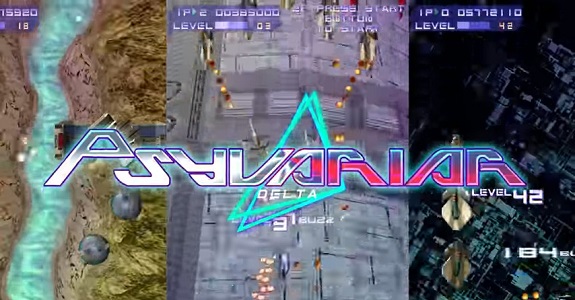 A few weeks ago, City Connection announced their latest game: Psyvariar Delta, releasing on August 30th in Japan. In that region, the game will offer various language options besides Japanese, including English, which could be seen as a sign that a western release was planned.

And yesterday, Dispatch Games (publisher of the other two City Connection titles in the West) announced that Psyvariar Delta would indeed be released in Europe and North America. The best part? It doesn’t look like there will be too long a delay between the Japanese and western releases, as the latter is announced for this Summer.

Also, Dispatch Games confirmed that just like Soldam: Drop, Connect, Erase and Penguin Wars, Psyvariar Delta will be released both in physical and digital formats.

Delta Point #1: New Mode
Players can now set their stage, planes, levels, and experience. In the REPLAY MODE+, a player can challenge each area with their own plane and bombs. SCORE ATTACK MODE allows a player to play for the high score with their difficulty. Both modes will have an online leaderboard to show how you stack up against other players.

Delta Point #2: New UI
The new UI shows Ex levels, boss health, and invincible time remaining after leveling up. The new design is easy for beginners to understand while the information helps experts as well. In the options menu, a player can show the hit area for their own plane and their enemies so that the game can be adjusted based on the players level of play.

Delta Point #3: New planes
Along with the 2 original planes, there will be new planes available as DLC which bring all new original attacks. These DLC can be used on all levels allowing players to have a different game play experience.

Psyvariar Delta (Switch) comes out on August 30th in Japan, and this Summer in Europe and North America. The Upcoming Games page has been updated!