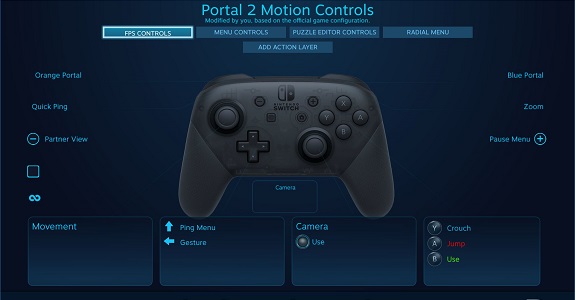 Yesterday, VALVe made a rather unexpected announcement: as of May 2nd, Steam offers official support for the Nintendo Switch Pro Controller (via Steam Input). What this means is that you can now use your controller to play any game compatible with the Steam Controller on your PC. You can even customise the controls, and use features such as the Gyro, and more.

In order to start using your Nintendo Switch Pro Controller on Steam, you first have to get on the Steam Client Beta (though this feature will later come to the stable release branch, so you can just wait a bit if you don’t feel like jumping on the beta).

In Steam, head over to the Controller Setings page, and check the “Nintendo Switch Configuration Support” option. There, you can create, share, and browse the configs on a per-game basis. You can even choose to use a global option to “Use Nintendo Button Layout”, which effectively swaps the A/B and X/Y buttons of your loaded config (useful if you’re using a Steam Controller, Xbox, or standard template config).

After that, you have to connect your controller and register it to your account when prompted. For the gyro specifically, it’s highly recommended to calibrate it by selecting the “Calibrate” option under “Detected Controllers”.

Once you’re done, you have to either create a config or load an existing one via the “Controller Configuration” option in the Manage Game screen. Plenty of options are available to you: in fact, the full functionality of the Steam Input Configurator is at your disposal, allowing you to bind the gyro, add radial menus, create action sets, and more. You can go with a community config too, if you prefer (just press X).

And that’s it: now, simply launch and play your game using your Nintendo Switch Pro Controller. The Home button allows you to bring up the overlay, from where you can tweak the config on the fly.

The Nintendo Switch Pro Controller isn’t the first console controller to get official support on Steam: the DS4 (PlayStation 4) and Xbox One controllers are also compatible. It’s also not the first time Nintendo controllers become useable on PC: mods have allowed players to use Wii Remotes for example, and the Wii U Pro Controller could also be used by tinkering with the Blutooth stacks (or simply using an adapter).

But it’s the first time a Nintendo controller gets official support. And the fact that features such as the Gyro are support shows VALVe seemingly got full access to the required API. This does seems to be 100% official support, even though Nintendo hasn’t made any official statement on the matter. Unfortunately, it’s not clear if the Joy-Cons will also be supported in the future or not.