The second part of the interview was published earlier this week: check out below for the link! 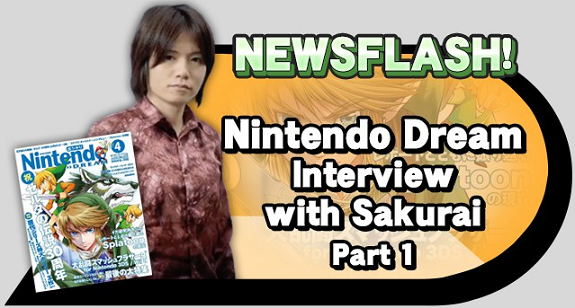 On Saturday, the April 2016 issue of Nintendo Dream came out in Japan.

This issue features a rather lengthy interview of Masahiro Sakurai (7 pages in total), covering various topics about Super Smash Bros. including the end of DLC development, the DLC stages and costumes, and more. Of course, the whole interview has been translated by the good folks over at Source Gaming, so make sure to check the link below for the link to each part.

In this part, Masahiro Sakurai mainly talks about the development of DLC for Super Smash Bros. for Wii U / Nintendo 3DS. He talks about how different development was compared to the full game (with a much smaller team), the excitement generated by characters announcements, the end of DLC development, pleasing the casual and competitive crowds, and more.

In this part, Masahiro Sakurai talks about the DLC characters:

It is by far the longest part of the three, with tons of details about each character, how they were created, and more. Click here to read everything!

In this part, Masahiro Sakurai talk about the various DLC stages:

He also discusses some of the DLC costumes, such as Geno (that Sakurai wanted to see as a playable character during the development of Super Smash Bros. Brawl), Flying Man, Inkling, Rathalos, Lloyd, and more.

Finally, if you want more info from the interview, you can check out Source Gaming’s discussion about the interview: