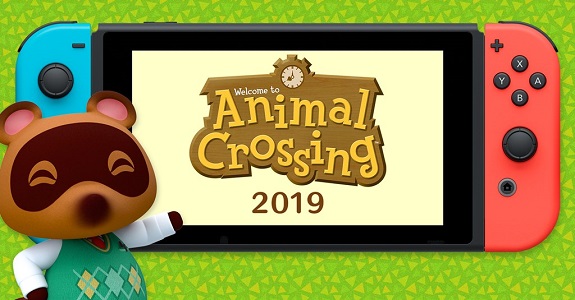 During the Nintendo Direct, it was announced that a brand new mainline Animal Crossing game was in the works for the Nintendo Switch. Unfortunately, we know absolutely nothing about it, just that it will be released sometime in 2019!

But that’s not the only bit of Animal Crossing new we got. Just before Animal Crossing for Nintendo Switch was announced, it was revealed that Isabelle is joining the roster of Super Smash Bros. Ultimate.

Also, Nintendo announced that Super Smash Bros. Ultimate is also getting a Nintendo Switch bundle. Just like the one for Pokémon: Let’s Go, Pikachu! / Let’s Go, Eevee, it includes a special dock (featuring characters from the original Super Smash Bros. game) and Joy-Cons, but no special console. It also comes with a download code for the game, which naturally cannot be used until launch day. This new bundle comes out on November 2nd in North America, and November 16th in Europe and Japan, and costs $359.99.

The Nintendo Direct kicked off right away with a big surprise: Luigi’s Mansion 3 for the Nintendo Switch, releasing sometime in 2019. Unfortunately, we know absolutely nothing about the game, though we did get to see a little bit of it during the presentation:

This version of the game does feature some additional content, namely two new playable characters: Nabbit (cannot take damage), and Toadette (who can transform into Peachette by getting a Super Crown).

Take on two family-friendly, side-scrolling adventures with up to three friends* as you try to save the Mushroom Kingdom. Includes the New Super Mario Bros. U and harder, faster New Super Luigi U games—both of which include Nabbit and Toadette as playable characters!

Two games in one, for double the fun! Simple, straightforward controls, new playable characters optimized for younger and less-experienced players, and a wealth of bonus content—like a Hints gallery and helpful reference videos—make this a perfect choice for anyone looking to introduce their family to the wonderful world of Mario. All a player needs is one Joy-Con controller, so two people can team up right out of the box! Tackle 164 platforming courses in the two main game modes and enjoy extra replayability with three additional game modes in which you can also play as a Mii character: Challenges, Boost Rush, and Coin Battle!

New Super Mario Bros. U Deluxe (Switch) comes out on January 11th worldwide. The Upcoming Games page has been updated!

During the Nintendo Direct, it was announced that Yoshi’s Crafted Island is the official title of the mysterious Yoshi game for the Nintendo Switch. It takes place in a world crafted from household items like boxes and paper cups. Once you’ve reached the end of a stage, you can actually go back to the start on the “flip side” in order to discover various secrets.

Yoshi’s Crafted Island (Switch) comes out this Spring worldwide. The Upcoming Games page has been updated!