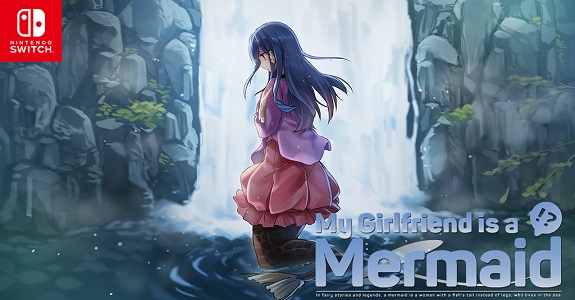 Update: as of yesterday, the Kickstarter campaign for My Girlfriend is a Mermaid!? is a sucess. Sekai Project needed $12 000 / 10 284€ for the project, and players have already pledged over $12 847 / 11 010€ (with 22 days left). No stretchgoals have been announced so far, but we will make sure to update this post should any be added to the campaign!

A few days ago, we learned that My Girlfriend is a Mermaid!? we headed to the Nintendo Switch, courtesy of Sekai Project. This is a Visual Novel developed by TALESshop (Korean developers) and Cosen (Japanese publisher), available on smart devices but only in Korean and Japanese.

In order to localise this game in English, and port it to the Nintendo Switch, Sekai Project needs support from fans: that’s why they launched a Kickstarter campaign for it. They need $12 000 / 10 294€, and as of writing, $7 403 / 6 350€ have already been pledged… and it hasn’t even been 24 hours since the campaign was launched!

If you’ve never heard of My Girlfriend is a Mermaid!? before, here’s what the story is all about:

──That summer, I met the mermaid you…

Our protagonist lives out in the city but one summer decides to return to his rural hometown and it is there he once again meets his childhood friend, Ion… who is now a mermaid!?

Soon after he also meets Petakko, a mermaid who has lost her memory and Rin, a priestess who looks after mermaids but also has a split personality. It is these encounters that brings our protagonist in contact with the legend surrounding mermaid.

Together with Ion, who is at the center of this mysterious legend, as well as Petakko and Rin, our protagonist’s strange summer vacation begins…

The Nintendo Switch version of the game will not be a mere port of the mobile game: it will also feature additional scenario content, Live2D animation, and a new theme song sung by the three heroines of the game. If the Kickstarter campaign is successful (there’s no doubt it will be!), and if all goes well, then the game will be released sometime in February 2019.

For more details about the Kickstarter campaign and/or the game itself, and if you’re interested in making a pledge, click here!

My Girlfriend is a Mermaid!? (Switch – eShop) should be released in February 2019 worldwide.