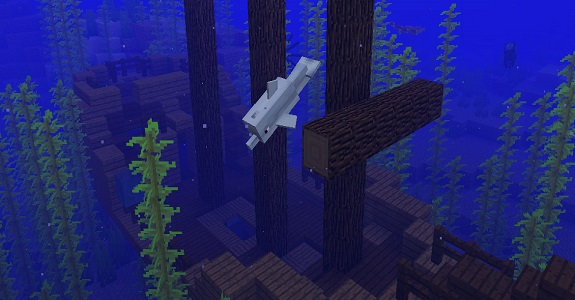 During the Minecon Earth livestream, last year, several announcements and reveals were made for Minecraft, including the Update Aquatic (that adds various underwater-related features and content). Naturally, it’s coming to the most recent versions of the game, but what about those on older consoles, like Minecraft: Wii U Edition?

Well, Mojang have confirmed that this particular version of the game will indeed get the Update Aquatic. It will release a little while after the initial launch on the Bedrock Engine-based versions (such as the Nintendo Switch one), but it’s definitely coming!

However, there’s a “catch”: this will be the “last big effort to keep those editions up to date” with newer versions of the game. In other words, this will be the last major update for Minecraft: Wii U Edition. Of course, that doesn’t mean there will no longer be any updates whatsoever (there most likely will still be various bug fixes updates), and there may be the occasional skin pack from time to time, but there won’t be anything too substantial.

Mojang took this difficult decision in order to focus their efforts on the platforms where people play Minecraft the most, and where they’re planning to add new features.. The problem is that the older generation of consoles now make up less than 5% of the active userbase… this is Minecraft, so that 5% is nothing to sneeze at, but it’s still not enough to justify continued development.

Of course, you will still be able to play the game (including online: servers aren’t being shut down any time soon!), purchase additional content, and more. It’s just that no more big updates will be released.

By the way, a quick reminder about the new version of the game on Nintendo Switch: all players will get it for free. You will be able to keep playing the old version if you want, but new updates will only come to the new version. Unfortunately, it’s not clear when the “Better Together” update will be released…