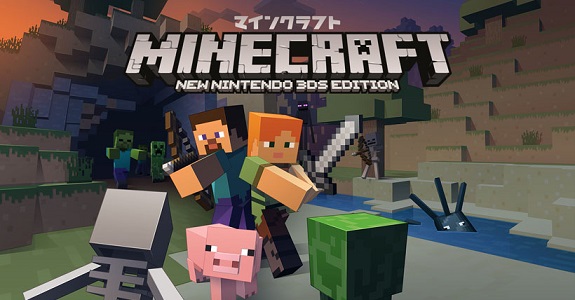 During the latest Nintendo Direct presentation, various games were announced, and some of them were really unexpected. That’s the case of Minecraft: New Nintendo 3DS Edition, which was released on the Nintendo eShop right after the presentation… well, except in Europe, for some reason!

Here’s the official description of this version:

Explore randomly‐generated worlds and build amazing things from the simplest of homes to the grandest of castles. Play in Creative Mode with unlimited resources or mine deep into the world in survival mode, crafting weapons and armor to fend off the dangerous mobs.

Here’s the presentation from the Nintendo Direct (in Japanese):

Minecraft: New Nintendo 3DS Edition requires 3 732 blocks / 466MB of free space on your SD Card, but that’s just for the game itself. You can have up to 8 save data files, and each one can take up to 200MB… so that’s 1.6GB in total for all files (about 2GB for game + saves), but only if you’re planning to maximise them all. Still, it’s good to keep that in mind while letting your creativity roam free!

Right now, it’s only available on the Nintendo eShop in North America and Japan, with Europe getting the game “soon”. There will also be a retail release, at a later date.

For those who are curious, this version of the game is custom made, seemingly from the Pocket Edition (Ver. 0.15.4, from July 2016 from the looks of it), and developed by Other Ocean Interactive.

During a recent livestream, the developers explained they were planning to keep working on it for 6 to 8 months (minimum), in order to add 3D, multiplayer, and features added in later versions of the Pocket Edition.

The thing is, the Nintendo 3DS (even the New Nintendo 3DS variant) isn’t exactly what you’d call powerful, so the developers had to work hard to adapt the game to the limited hardware. They basically branched out from Ver. 0.15.4, and then worked on getting the game running first… something they obviously could not do while adding new features at the same time.

Once they’re done working on the bug fixes for the current version, they will move on to Ver. 0.16.0, which added ocean monuments, prismarine, and more.

Unfortunately, it’s not going to get the Better Together update (it doesn’t even have multiplayer right now), but it’s possible it could get some of the features later down the line.

Minecraft: New Nintendo 3DS Edition will be released at retail at a later date. It’s been added to the Upcoming Games page!