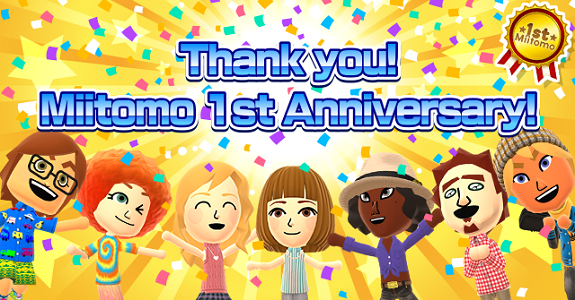 Today is March 31st 2017, and exactly one year ago, Miitomo was launched in Europe and North America. To celebrate this first Anniversary, and thank players for their support, Nintendo launched the Miitomo: 1st Anniversary Celebratory Promo.

As usual, there’s several parts to this event:

From March 31st to May 1st, you can get several goodies as log-in bonus. There’s 8 of them in total, and if you want them all, you need to log-in for the first time before April 24th and then never miss a single day.

From March 31st to April 27th, popular items from previous Miitomo Drop stages are back in 1st Anniversary versions:

Ahead of this Anniversary promo, Nintendo held a survey via Twitter, so that fans could choose their favorite Miitomo Drop stages. The 4th stages with the most votes would be brought back for the Anniversary promo, in a special version with only items (no sweets). However, there’s a (minor) catch: you can only use coins to play… no ticketing your way out of paying, this time!

Here’s the 4 stages being brought back (as well as their availability period):

Starting today, the following items are available in the Shop:

To celebrate the 1st Anniversary of the app, Nintendo launched the Outfit Design Contest, which runs until April 16th. The goal is to have players come up with unique designs for Mii outfits, with the winning entry to be distributed to everyone at a later date.

If you want to participate, there are a couple of things you need to keep in mind:

For more details about this Outfit Design Contest, including more guidelines and the Terms and Conditions, click here!

This part runs until April 17th, and has players share their own Miitomo 1st Anniversary-themed Miifotos for Nintendo to create a Miifoto mosaic with. They’re going to take the various (eligible) Miifotos shared during the event, and then compile them into “one amazing piece of mosaic art” that will be displayed on the official website.

You can submit pictures from April 7th (today) to April 14th: you can check the pictures submitted by others users by clicking here!

Here’s how you can enter:

Nintendo specifies that not all Miifoto will be used in the mosaic, even if they’re eligible. Naturally, your entry has to be created in Miifoto, must be your original creation, must not include any sensitive content, etc. You also need a valid Twitter account, and live in one of the countries where Miitomo has been officially released. Finally, there’s no limit on the number of entries.

The mosaic will be revealed on or after April 30th, on the official website. For more details about this event, click here!

Starting today, and until April 16th, the Miitomo admin team is going to go through the various submissions sent to Style Central, picking their favourite outfits. After that, the chosen outfit will appear in an in-app notification, along with comments from the admin team. Unfortunately, it doesn’t look like there’s anything to win, just a little bit of fame!

The good news is: all outfits submitted during the event will be considered, and there’s no set theme… you can chose whichever outfit you want!

Here’s some important info about the event:

From March 31st to April 25th, special Anniversary-themed questions will be available as the Question of the Day and in Answer Central.