Today, Famitsu shared a preliminary report for video game sales in Japan during the past Fiscal Year (March 27th 2017 to March 25th 2018, to be precise, so 52 weeks in total).

First, we have the Top 10 Software, largely dominated by two Nintendo platforms: the Nintendo Switch and the Nintendo 3DS. The best-seller is Pokémon Ultra Sun and Ultra Moon, with 2 198 231 units sold at retail (including the dual-pack). That’s not as much as Pokémon Sun and Moon, but as a third-version, it was bound to sell less.

Splatoon 2 isn’t far behind, with 2 146 190 units sold. In fact, if you factor in digital sales, it most likely outsold Pokémon Ultra Sun and Ultra Moon.

Of course, total sales for the two games will not stay that close much longer. Indeed, Splatoon 2 is bound to keep selling throughout pretty much the entire lifecycle of the Nintendo Switch, while Pokémon Ultra Sun and Ultra Moon will drop like a rock as soon as the next Pokémon game, for Nintendo Switch, is properly announced/revealed.

As for the Nintendo 3DS version of Dragon Quest XI: Echoes of an Elusive Age, it sold 1 763 948 units. Unfortunately, sales quickly fizzled out once the Summer holidays ended, and didn’t show up again during the Christmas holiday, which is why it didn’t manage to reach 2 million units LTD.

Super Mario Odyssey had a great performance, with over 1.5 million units sold during the first 6 months (1 613 076 to be precise). As mentioned several times before, it’s basically guaranteed to reach 2 million units LTD… the only question is when!

And despite being a “mere” enhanced port of a Wii U game, Mario Kart 8 Deluxe went on to sell almost 1.4 million units (1 397 018 to be precise). It’s not clear if and/or when an original entry will be released on Nintendo Switch, but in the mean time, this one is going to keep selling steadily!

The Legend of Zelda: Breath of the Wild managed to find its way in the Top 10 Software for the full Fiscal Year, despite launching during the previous one. It sold 563 274 units during Fiscal Year 2017, which is pretty impressive for a Zelda game. The best part is that it doesn’t look like it’s going to stop selling steadily any time soon. Since launch, over 870 895 units have been sold at retail.

Unfortunately, Yo-kai Watch Busters 2 didn’t sell nearly as much as its predecessor, but it still manage to reach a pretty respectable 500 000 units… if you factor in digital sales: total sales at retail topped 491 779 units. It will be interesting to see how the Yo-kai Watch series fares in the upcoming months and years, what with the “switch” to a new platform…

Finally, Monster Hunter XX went on to sell “only” 417 119 units during Fiscal Year 2017, with most of total sales coming from its launch month. Sales quickly faded out for several reasons: it’s an enhanced release of a spin-off, Monster Hunter World was announced, and a HD version was released on Nintendo Switch in August.

A total of 7 games sold more than 1 million units during Fiscal Year 2017, as opposed to 4 during the previous one. 3 of those million-sellers are on Nintendo Switch, with the Nintendo 3DS taking 2 of them.

As mentioned above, Nintendo platforms dominate the Top 10, with 8 spots out of 10 taken by either the Nintendo 3DS or the Nintendo Switch (they each get 4).

Hardware-wise, the Nintendo Switch also dominated sales: in fact, it accounts for almost 50% of Total Hardware sales! It sold over 3.5 million units, which is an impressive number when you take into account the many months it was completely sold out in stores (it’s only in February and March that shortages began to fade out).

Could the Nintendo Switch sell 4 million units during its second year on the market? It’s certainly possible, but Nintendo will need to bring out the big guns to make it happen… and make sure to avoid shortages over long period of times! Speaking of 4 million units, the console did reach that milestone if you add sales from launch month!

As for the Nintendo 3DS, it did see a significant drop in sales, with “only” 1.4 million units sold. That’s actually a pretty respectable result, given all the spotlights were pointed at the Nintendo Switch. Nintendo’s handheld is clearly on the way out, but at least, it’s going out with its “head” held high. It’s not clear how much the handheld will sell in 2018, but it does look like reach 1 million units is going to be tough. 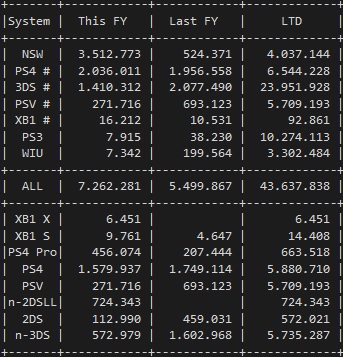 As a whole, the market grew during the past Fiscal Year (for the second year in a row), but that growth is almost exclusively due to Hardware (and more specifically the Nintendo Switch). Software-wise, the Nintendo Switch also performed well, but there’s no doubt it would have performed even better with proper third-party support.

Naturally, Famitsu expects the Nintendo Switch to keep performing well during the current Fiscal Year. They point out a few key titles to watch for: Nintendo Labo (out on April 20th) and Super Smash Bros (2018).