Famitsu have shared another report for video games sales in 2018 in Japan, covering the period going from January 1st to December 30th. That’s one more week compared to 2017, which had 53 weeks instead of the usual 52 (something to keep in mind when comparing 2018 data with 2017).

Super Smash Bros. Ultimate was the best-selling game, with 2 360 655 units sold in a few weeks: that’s more than the games ranked #2 and #3 combined! And the game ranked #3 is none other than Pokémon: Let’s Go, Pikachu! / Let’s Go, Eevee, which sold 1 253 677 units: not the most impressive performance for a Pokémon game, but this isn’t your regular Pokémon game after all.

As for Super Mario Party, it was the 6th best-selling game in Japan with 764 853 units sold at retail alone. As of writing, it’s already sold over 1 million units, and the question is now whether it will reach 2 million units or not (it will most likely depend on when the next entry in the series is released).

Kirby Star Allies was released in March, and went on to sell about 664 815 units at retail alone in 2018 (making it the 7th best-selling game of the year). It’s a pretty good performance, in line with previous entries in the series. Unfortunately, it looks like reaching 1 million units at retail alone is going to be a bit difficult (it’s a different story if you factor in digital sales).

Finally, Minecraft sold 525 045 units at retail in 2018, making it the 9th best-selling game of the year. It’s already sold pretty well on the Nintendo eShop since 2017, so it definitely would not be surprising if total sales were nearing 1 million units as of writing.

Super Mario Odyssey also enjoyed strong sales through 2018, but those were more in line with those of a Single Player game. It sold 575 926 units in 2018 (-57%), bringing total sales to 1 900 206. It’s already guaranteed to reach 2 million units at retail alone (already reached if you factor in digital sales).

And finally, despite being a Single Player game without a single bit of multiplayer, The Legend of Zelda: Breath of the Wild sold nearly half a million units in its second year (491 648 units to be precise), which is only 29% less than in 2017: it’s pretty unusual for Single Player games to sell like that (The Legend of Zelda series is no exeption).

As you can see for yourself, the Nintendo Switch completely dominated Software sales in 2018 in Japan, with 9 of the games in the Top 10.

Hardware-wise, the Nintendo Switch also dominated sales: it sold nearly 3.5 million units, which is more than all other platforms combined. It only sold about 75 000 units more than in 2017, which is a smaller gap than the one reported by Media Create.

The reason for this is mentioned at the very top of this post: Famitsu had 53 weeks in 2017 (instead of the usual 52). In other words: there’s one less week for 2018, and the difference is quite noticeable when comparing yearly sales. But there’s no denying that, even without that “missing” week of sales, 2018 sales could have been better for the Nintendo Switch (it’s not like they were bad or anything, though!).

Total sales nearly topped 7 million units, with 6 889 546 units sold by the end of the year. If the 2018 line-up had been just a tad better (with less focus on the last quarter), there’s no doubt the 7 million units milestone would have been reached in 2018 instead of early 2019. Dengeki frequently mentioned the lack of big hit through Fiscal Year 2018-19 (up until the heavy-hitter in Q3), and just one such game would definitely have been enough.

As for the Nintendo 3DS, it only sold 1/3 of its 2017 sales, with 566 420 units sold. It’s pretty clear both the market and players themselves have moved on, mosly to the Nintendo Switch. Unfortunately, it looks like reaching 25 million units is going to be quite tough, given the sales trajectory of the handheld…

In total, about 5 943 106 consoles were sold in Japan in 2018, which is quite the drop compared to 2017 when 7 618 598 consoles were sold. And this time, it’s not just because of the “missing” week mentioned above: the drop is too big. It’s mostly due to the dropping sales of the “old” platforms, including the Nintendo 3DS. Unfortunately, the Nintendo Switch is the only console that can sell enough to compensate for the drop, and it clearly didn’t in 2018. 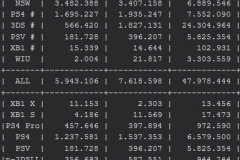 Finally, Famitsu report that Hardware sales topped 170 000 million Yen in 2018, as opposed 202 370 millions in 2017. The drop should have been bigger given the drop in sales by unit, but the higher price of the Nintendo Switch helped a bit.

Software-wise, sales topped 176 010 million Yen, which is less than 2017 with 189 380 million Yen. Since 2018 had one less week than 2017, it’s pretty safe to say that Software sales were more or less flat. This is primarily due to the fact that the vast majority of games sold in 2018 were on Nintendo Switch and PlayStation 4, which are a fair bit more expensive than Nintendo 3DS games.