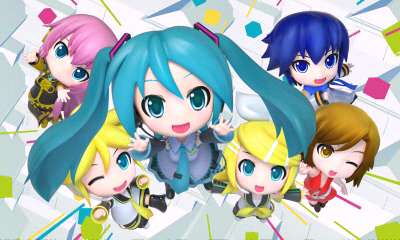 After a delay of several months (it was originally supposed to come out in May), Hatsune Miku: Project Mirai DX is finally ready to come out in Europe and North America, next week! To prepare for this long-awaited launch, SEGA has finally opened the full English website for the game: click here to find plenty of information, including the tracklist, details on the various modes, and even a set of AR cards to print out.

But that’s not all: SEGA also published a blog post, with additional details about the game. First, they tell us about the Dance Studio, where you can make your characters dance using Dance Cards. Here’s the different kinds of moves you can use:

The Dance Studios has two modes:

Once you’re done, you can share your choreography with other players, via StreetPass. Of course, you can check out those received from other players, and the game gives you the opprtunity to change the camera angles on the fly if you want to be a Director.

Next, SEGA gives some details about the Profile Card you can share with other players via StreetPass. It’s made of several elements:

Whenever you meet other players via StreetPass, you will get updates for their Profile Cards if they made any modifications.

Finally, we have some details about the mini-games found in Hatsune Miku: Project Mirai DX, starting with Puyo Puyo 39. You can chose to play against the CPU or a friend, via local wireless, and while listening to the game’s soundtrack. If you become good enough, you can even unlock a little bonus!

As for Mikuversi, it’s a special version of the famous board game. If you play against the CPU, you better be prepared: if you get better, it also gets better!