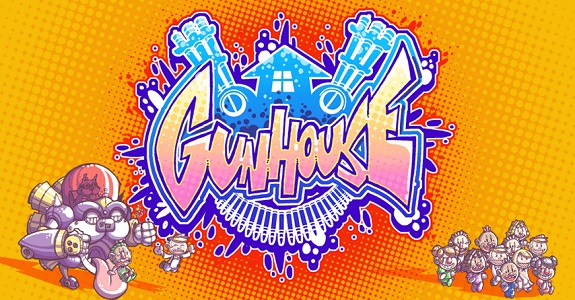 Gunhouse is a unique game that’s part puzzle, part active tower defense; a turn-based puzzle game with a little bit of action on the side. Your goal consists in making big combos, in order to launch a hail of bullets and special attacks, and get rid of those pesky enemies. The game features a distincy art style by Juan Ramirez, music by Disasterpeace (known for their work on Fez), and code by Jim Crawford (who made Frog Fractions).

The interesting thing about this game is that it’s actually based on a tweet of… Peter Molydeux, the infamous parody account of Peter Molyneux:

This game sure does have a weird history. It began life as a jam game for the first Molyjam. It was based on the Peter Molydeux tweet, “You live in a little house made of guns. You need many guns to fight invaders but also need to keep a roof on top of your many children”. When Necrosoft Games was figuring out what projects to make first, Gunhouse was a natural fit, since we had a game jam prototype already!

The Nintendo eShop lists Gunhouse for a January 15th release in Europe and North America, where it will cost 12.99€ / $14.99 respectively. It will require 964MB of free space, and will only have English as language option.

Gunhouse (Switch – eShop) comes out on January 15th in Europe and North America. The Upcoming Games page has been updated!