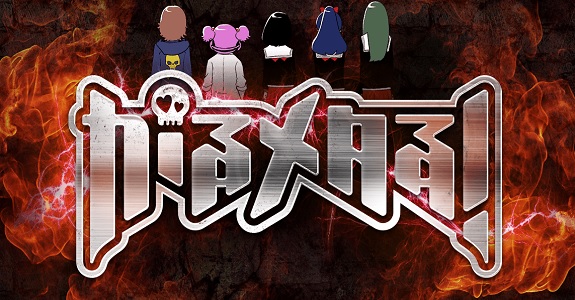 Gal Metal is the latest game from the one and only Tak Fuji, and it was released back in February in Japan. Chances of localisation seemed rather low, but it looks like there wasn’t any need for concern: XSEED and Marvelous have announced that it will be released this Fall in Europe and North America. And no, this isn’t a digital-only release: the game will also be available at retail!

For those of you who never heard of this game, Gal Metal is a new kind of rhythm game without any prompts on the screen. It also features a rather wacky story, where you need to protect the Earth from invading aliens!

Speaking of the story, here’s what it’s all about:

Planet Earth is on the brink of invasion after humanity ruined the peace and quiet of the universe with the broadcast of metal music on the Voyager probe’s Golden Record. Aliens picked up the signal and couldn’t stop headbanging, and now they’re dying off because of it… so they want revenge!

A few rogue extraterrestrials make their way to the source of the music and abduct two high school students from the Tokyo suburb of Kichijoji: an unnamed boy, and a drummer named Rinko from an outrageous girls-only metal club. The aliens needed an emissary with whom to discuss the terms of their revenge, and felt either of these two would serve nicely. However, being unable to choose between them, the aliens simply decided to merge their souls into a single being!

Now, working together, the all-in-one pair must team up with the other members of K.M.G. (the Kichijoji Metal Girls) to rid the planet of these eight-tentacled extraterrestrials using the power of metal. It’s time to rock these music-hating creeps all the way back to whatever planet they came from!

If you want to see some gameplay footage (from the Japanese version, unfortunately), you can check out the teaser trailer for XSEED / Marvelous Europe’s 2018 3rd-party line-up:

Gal Metal (Switch) comes out this Fall in Europe and North America. The Upcoming Games page has been updated!