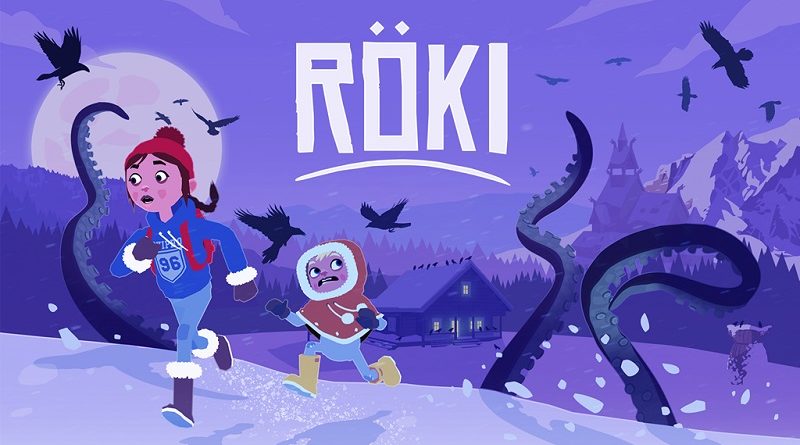 Polygon Treehouse have announced that Röki will be released on October 15th in Europe and North America.

Rediscover magic and chart your adventure through this forgotten northern world of mystery and monsters. Find your courage, discover hidden paths, solve ancient puzzles and travel deeper through the icy land to learn the truth. Explore a rich, beguiling Northern world of mystery and monsters; filled with detail and brought to life by Roki’s signature graphical style.

Röki (Switch – eShop) comes out on October 15th in Europe and North America.

Puny Human have announced a game for the Nintendo Switch: Galacide, which combines Shmup with match-3 puzzle gameplay. It will be released on October 23rd in Europe and North America.

Galacide takes the tight controls and speed of a SHMUP game and combines it with a match-3 puzzle system. Players journey across the galaxy battling hordes of enemy ships while simultaneously using their puzzle-solving skills to tunnel through the ever-advancing Bitwall.

It’s up to you to stop the Alien invasion! Galacide requires players to walk a fine line between maneuvering through legions of enemy spacecraft and using their puzzle-cracking ability to keep the increasing mass of deadly alien technology at bay. Players must pair quick-moving skill to dodge attacks and eliminate enemies, with wits to solve puzzles, or suffer the deadly Bitwall! Bad guys will drop pieces of coloured scrap that players can fire at the Bitwall to match 4 or more same-coloured blocks and to create a path to advance through. A precise mix of speed, skill, and good old fashioned quick-thinking is the key to success and the safety of the galaxy!

Galacide comes equipped with a bevy of different game modes sure to please even the most particular of gamers. Jump into some solo-action with the Campaign mode to discover the source of the invasion and shoot your way to the finish line, or grab some buddies and team-up with 4-player local co-op. Once you’ve saved the universe and mastered the skills, try out the Endless Play mode and see how long you can last. For those pacifists out there, Puny Human has also kindly provided a violence-free Puzzle Mode, allowing players to relax their trigger fingers and focus on the brainier side of things.

Galacide (Switch – eShop) comes out on October 23rd in Europe and North America.

Perfect World have announced that Torchlight III will be released on October 22nd on Nintendo Switch, less than 10 days after other platforms.

Thunderful have announced that the Eldfjall DLC for Lonely Mountains: Downhill will be released on October 22nd, and will cost 5.99€ / $5.99.

Here’s some more details about it:

Eldfjall Island comes complete with brand-new challenges for each of its four trails. Players will be able to unlock new outfits, paint jobs, and accessories all while racing down the mountain as quickly as possible to climb up the leaderboards. Additionally, new special effects will make the journey even more intense than ever before with thunderstorms and an active volcano!

And as announced previously, a free update will be released on the same day, adding Daily Rides challenges:

Team Woodsalt have announced that Woodsalt has been delayed to December 2020. It was originally supposed to launch… today!

Emerging from cryostasis to discover a brand-new world in Woodsalt, players control Emcy, whose proclivity for sleep has taken him to Nu-Terra, a sprawling city contained within a bubble, 1000 years after disaster on Earth. How? Why? What? Where? As you develop relationships with a cast of quirky characters and otherworldly locales, steadily uncover a mystery that spans the entire universe and your very existence.

Woodsalt (Switch – eShop) comes out in December in Europe and North America.

Next Studios have shared a Development Blog post for Crown Trick, detailing early development. Click here to check it out!