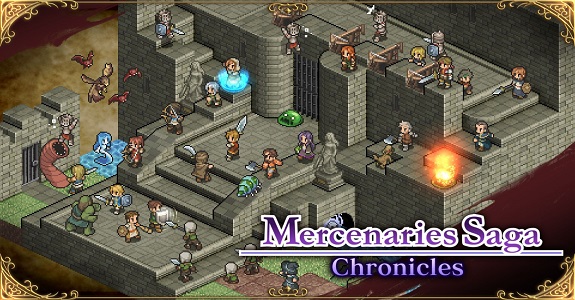 BitSummit is the premiere event for indie games in Japan, and it’s only been getting bigger and bigger every year. Case in point: almost 10 000 peopel attended the event last year (in May), which was the largest gathering yet.

A few days ago, the Japan Independent Games Aggregate (the committee organizing BitSummit) announced that BitSummit Volume 6 would take place on May 12th and May 13th (10AM to 5PM on both days), at the Miyako Messe.

This year, the organizing ommitte is expecting no less than 80-100 game developers from both Japan and abroad, and over 10 000 visitors over the course of the week-end.

War of Genesis is a series of Strategy RPG originally developed by Softmax, and it looks like it’s headed to the Nintendo Switch… at least, the second entry is! Earlier today, Next Floor (who bought the IP from Softmax) announced that the remake of War of Genesis 2 would be released on Nintendo Switch.

Unfortunately, we know absolutely nothing about the game itself, as it was originally supposed to be revealed and released this year, but now, both will only happen… next year. We do know on which engine it will run (Unreal Engine 4), and on which platforms it will be (it’s a Nintendo Switch exclusive… at least, as far as consoles go).

A few days ago, Circle Ent. teased a game announcement for January 1st. And that announcement was for… Mercenaries Saga Chronicles! It’s not a brand new entry, but a collection of all three games. We don’t know if there’s going to be any extra features and/or content, but hopefully we won’t have to wait too long before finding out. Circle Ent. promised more details would be shared “soon”.

Last month, Jools Watsham / Atooi released Mutant Mudds Collection: their very first Nintendo Switch game… but certainly not their last! Last week, Jools Watsham announced that at least 3 more games would be released on the console in 2018… but didn’t even give a hint as to what they would be.

Another indie success story on Nintendo Switch! Last week, Dodge Roll Games announced that in just two weeks, the game sold over 75 000 units worldwide. The game has “surpassed all expectations”, which is an extremely positive sign. Here’s to 100 000 units sold!