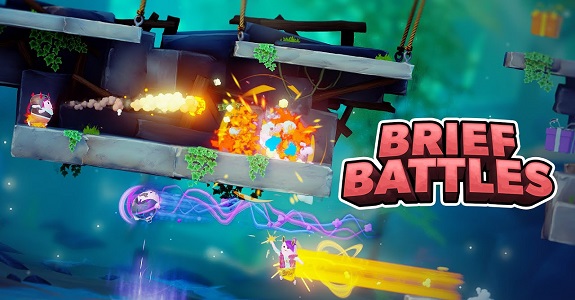 Juicy Cupcake has announced that Brief Battles, a “fast-paced, underwear-fueled party game”, is coming to the Nintendo Switch next year. Here’s a trailer, some details, and some screenshots:

Grab your lucky underpants and slam into Brief Battles, a party game with a cheeky twist – it’s all about the undies. Start hilarious battles with nothing but your buns to squish those in your sights. Scramble to grab super-powered underpants to gain an underwear-fueled edge over your friends as you strive to prove who has the mightiest buns.

Adorable underwearriors will gain astounding abilities by slipping on an arsenal of powerful undies including Toxic Tighty-Whities, Buns of Steel and Flaming Hot Pants as they leap, wibble and jiggle through 50 vibrant and treacherous 2.5D arenas. Locales like the Dusty Desert and Crystal Caverns are packed with distinctive hazards including ice-slicked floors, unstoppable creatures and tricky platforms.

Gather up to three friends and choose from a butt load of team and free for all modes including Classic Battle, Hold The Gold and Underpants Collector for a wealth of ways to butt friend or foe out of the couch gaming competition. Team up with a friend to take down cute beasties and bosses or test your skills in solo challenges to unlock rewards.

Brief Battles (Switch – eShop) comes out next year in Europe and North America. The Upcoming Games page has been updated!

Treasure Stack was initially slated for a December release, but yesterday, the developers announced that it has been delayed to Early 2019.

Stacking ain’t easy. Sometimes when you’ve lined up the perfect combo (launch), a surprise block (a delay) shakes it all up.

To make sure you get the best Treasure Stack possible, we’ve made the hard decision to delay until early 2019. Thanks for all your support! pic.twitter.com/I1wKQ2rz6T

Treasure Stack (Swithc – eShop) comes out in Q1 2019 in Europe and North America. The Upcoming Games page has been updated!

Today, it was announced that Demon Crystal will be released on December 20th. It’s now available for pre-purchase on the Nintendo eShop, with a 20% off discount: 777 Yen (regular price: 972 Yen). It requires only 95MB of free space, but does not offer an English language option.

Demon Crystal (Switch – eShop) comes out on December 20th in Japan. The Upcoming Games page has been updated!

Today, Nippon Ichi Software announced they are bringing Nidhogg 2 to Japan next week, on December 13th. The game is already available for pre-purchase on the Nintendo eShop, and costs 1 620 Yen. It requires 634MB, and offers all the language options found in the European and North American versions of the game (including English, of course).

Nidhogg 2 (Switch – eShop) comes out on December 13th in Japan. The Upcoming Games page has been updated!

PLiCY has announced another game for the Nintendo Switch: WWA Collection, releasing on December 20th. It’s already availabl for pre-purchase on the Nintendo eShop for 1 500 Yen. It requires 6.4GB of free space, and unfortunately, it does not offer an English language option.

WWA Collection (Switch – eShop) comes out on December 20th in Japan. The Upcoming Games page has been updated!