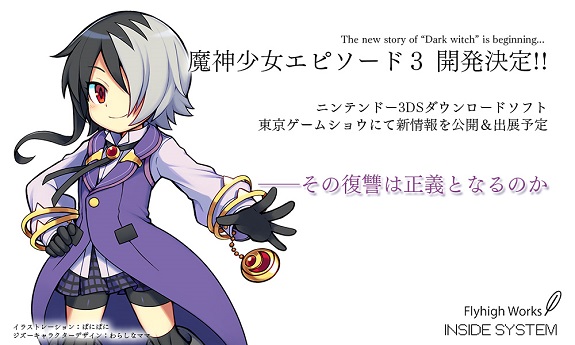 Last week, the developers of Heart Forth, Alicia (coming to Wii U) posted the latest Kickstarter update for the game. In this one, they talk a bit about the development as a whole. Here’s what they had to say about this:

Among the usual things, we’ve been pressing on with the development of the core path of the game which includes making new rooms, areas, their respective enemies, new environment art, making some pretty elaborate cutscenes, and finally checking off some smaller things that had been in the checklist for a while.

They also introduce some of the new team members, and more.

The Legend of Dark Witch 3

Did you like the first two The Legend of Dark Witch games on Nintendo 3DS? If yes, you’ll be glad to learn that a third entry was announced last week-end by INSIDED SYSTEM. Unfortunately, all we have now is that illustration:

The game will be revealed next month, at the Tokyo Game Show. It will be released on Nintendo 3DS, via the Nintendo eShop.

Saber Rider and the Star Sheriffs

Today, the developers of Saber Rider and the Star Sheriffs posted the latest Kickstarter for the game. In this one, they explain the lack of updates in the past few months, which is due to the health of one of them (Chris). That being said, development seems to be going well:

The game is taking great shape. The team made very good progress.
Game and Editor are coming along fine. The graphics quality has been raised drastically and is going exactly into the direction as I had it in mind. Henk is doing a awesome job with the background GFX.

Here’s the two screenshots they shared:

Here’s the trailer for Ambition of the Slimes, which comes out this Thursday in Europe and North America (on Nintendo 3DS, via the Nintendo eShop):

Extreme Gravity Rage is a game greatly inspired by F-Zero GX (understament of the day!), which could be coming to Wii U in May 2017 (at the earliest). The Kickstarter campaign was launched yesterday, and unfortunately, it’s off to a pretty bad start: the developers require 135 000€ by September 6th, and right now, only 912€ have been pledged…

You can click here to check out the Kickstarter campaign!